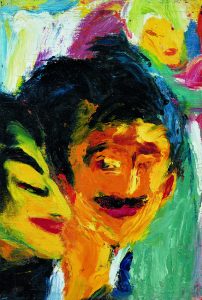 Emil Nolde is considered a leading representative of expressionism and one of the most well-known artists of the 20th century. His work is widely known for its extraordinary intensity of colour. Nolde explored the grotesque, the fantastic and the exotic in order to develop his own pictorial language and escape from the European tradition of art. This exhibition presents a selection of 170 works by the artist and sheds light on these and other themes in his oeuvre.

In whatever shape or form Nolde encountered with the Other or the unknown, it appears to have inspired his art while liberating him from norms and accepted practices. His unique oeuvre is totally different to that of his contemporaries. Especially during the period in which the Nazi prohibited Nolde from pursuing his profession as an artist—which he could not understand because he saw himself as an essentially German painter—he painted his “unpainted pictures.” It hardly comes at a surprise that he often found refuge in a fantasy world that gave rise to a myriad of spirits and mythical creatures during this period.

The exhibition has been organised in close collaboration with the Nolde Foundation Seebüll.