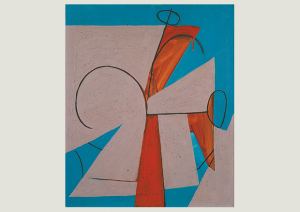 The exhibition is the very first substantial show to illustrate the impact of Paul Klee′s work on mid-twentieth-century U.S. art. Ten selected American artists, including notables such as Jackson Pollock, Robert Motherwell and Mark Tobey, will bear eloquent and impressive testimony to the extent to which these artists were inspired by Klee′s artistic concepts and practices.

If Klee′s impact on that generation of young American artists has been acknowledged, the phenomenon has not so far been studied to any greater depth. This exhibition, therefore, is the first attempt to fill the research gap. Paul Klee′s works stand alongside pieces by William Baziotes, Gene Davis, Adolph Gottlieb, Norman Lewis, Robert Motherwell, Kenneth Noland, Jackson Pollock, Theodoros Stamos, Mark Tobey and Bradley Walker Tomlin.

The exhibition has been conceived and arranged in cooperation with the Phillips Collection, Washington D.C., where it will be hosted from 03 February until 06 May 2018.

In the 1930s and 1940s a real Klee boom, with large numbers of exhibitions, occurred in America. Many of Paul Klee’s German dealers had emigrated to America to escape National Socialism. Klee himself fled Germany to his home town of Bern at the end of 1933. While the art market in Europe collapsed and Klee went on working in relative isolation in Switzerland, he enjoyed great success in America. But he never traveled to the USA. American artists in particular reacted positively to his work from the very beginning. They were trying to overcome the American and European legacy in visual art. For that reason, they were particularly fascinated by Klee’s ability to combine different artistic trends (Cubism, Surrealism, Constructivism) into a new style.

They managed to bring about this new beginning by returning, like Klee, to the origins of creative activity. On the way to a new art they used different methods. They used the procedure of automatism developed by Klee and later by the Surrealists. They unconsciously drew free lines with pen or brush, which they then consciously reworked. Going back to the beginnings of creative expression led them to engage with children’s drawings and tribal art. Most importantly, they incorporated the simplification and schematization of archaic and generally valid symbols and signs into their own work.

The line, as the most universal and direct medium, was the best suited for expressing the primitiveness they were striving for – another reason why Klee, who was primarily a draughtsman, served as a model for them. He also saw drawing as a form of writing and developed a calligraphic pictorial language of his own, one which alternated between spontaneity and control. The American artists presented in this show also sought to reconcile those opposites in their work.

For the exhibition we have chosen ten artists who either expressed themselves explicitly about Klee’s work or who learned indirectly from his artistic achievements. Klee was one of many artists who inspired them to develop a pictorial language of their own. The exhibition does not focus on the similarity between Klee’s works and theirs, but instead seeks to reveal a similar method and a shared attitude towards the creative process.