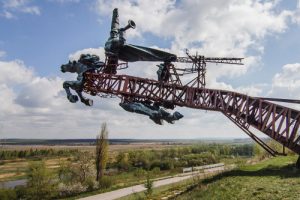 The first major presentation of the Ukrainian contemporary art scene in Hungary is a special occasion to look into the vibrant art of a country full of tensions, which is still largely in the blind spot of the European cultural area.

Ukraine, which has become independent for nearly thirty years, struggled with the phenomenon of oligarchic capitalism, is beyond three waves of mass demonstrations, two revolutions, and the annexation of the Crimea, and at present, a war is going on in the eastern part of the country – all this is a consequence of a neurotic and delayed “de-communizing”.

Since the 1980s, a new Ukrainian art has emerged, which radically broke away from Socialist Realism to follow the international cultural processes. The artist generation of the late 1980s and early 1990s is the most significant phenomenon since the Avant-garde of the early 20th century, which Stalin’s regime completely eliminated in the 1930s. The post-Soviet search for identity in the 1990s and early 2000s was gradually replaced by the need to reconsider political art, the importance of understanding social processes and the growing interest in activism came to the fore. All this coincided with a technological and global change that resulted in the rise of a new generation of artists who seek a new meaning, audience, and purpose.

The exhibition “Permanent Revolution” aims at exploring today’s Ukrainian art in a historic moment when people build barricades on the country’s main square with startling regularity, with beauty and elemental conceptualism that the world’s best artists could envy. The exhibition presents nearly forty artists of different generations.

Through the art and culture people from the different countries get a better understanding that world is united by the humanistic values. Zenko Foundation actively supports international communications in culture and arts. As such cooperation forms a positive image of the country, increases interest in Ukrainian contemporary culture and helps the development of cultural diplomacy.

37 Ukrainian contemporary artists and art groups are to take part in the project:

Curators: a responsible exhibition curator from Ludwig Museum is its director Julia Fabényi, and curators from Zenko Foundation are Alisa Lozhkina and Kostiantyn Akinsha.