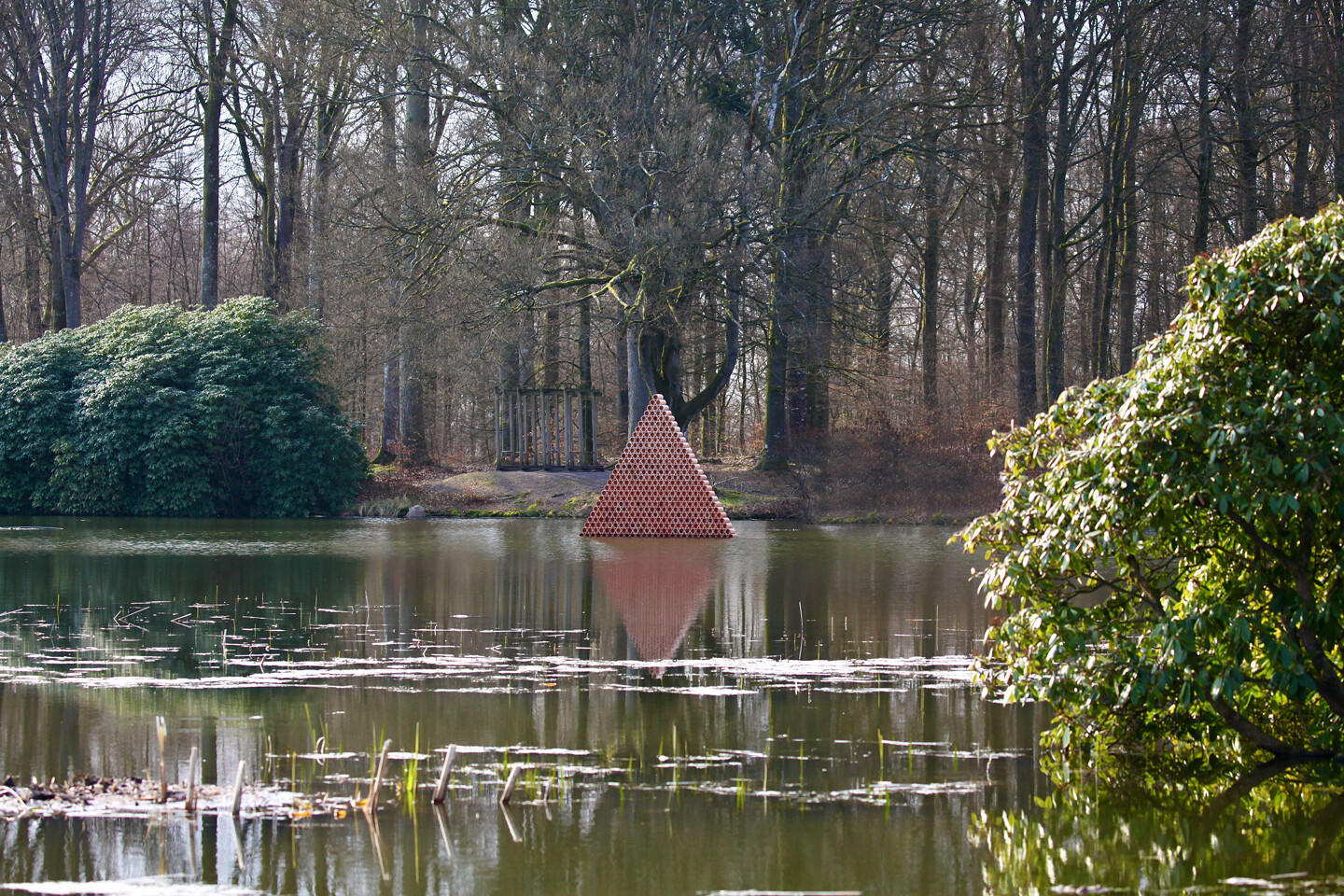 Wanås Konst is a unique cultural foundation in southern Sweden that commissions art that expands the notions of sculpture and landscape. It is composed of a sculpture park and art galleries on the site of a Renaissance castle and an organic farm. On May 8, two parallel presentations open: Infinite Geometry by Rana Begum, with new works in the landscape; and Martin Jacobson’s large-scale backdrops for theater, taking on the leading role in Queen of F*cking Everything.

Rana Begum’s work is 300 meters of brick footpaths leading us out into the sculpture park. Composed of a pattern based on large triangles in black, white, and brown, and surrounded by emerald-green lawns, the geometry depends on the measurements of the clay pavers, a material present in the historical buildings and once fired in a kiln on site. Following the layout of landscaping from 1820 around the 15th century Wanås castle, the three joining paths mark out direction and sightlines. Begum doesn’t merely fill the space along the existing lines of the paths. She breaks down the repetitive geometrical pattern, widens and swells the paths, thus collapsing the power of monumentality and offering room for reflection and different points of views. In addition Begum presents two new freestanding sculptures in the sculpture park, as well created with site-specific materials – terracotta pipes and tiles.

The new works are accompanied by a recent series of intimate watercolors exhibited in the art gallery. Made during the pandemic lockdown, dabs of color fill tiny squares on a grid paper. Reminiscent of Agnes Martin’s work, Begum combines the abstract ideal with a meditative quality and gives room for the personal and emotional. A slight shift in color reveals each interruption in the making, not unlike the variations in the bricks used in the footpaths that through inherent qualities in the material and the process show slight alternations in scale and color.

In 2018 Martin Jacobson was commissioned to paint backdrops for Queen of F*cking Everything by Swedish playwright Jonas Gardell and to fuse his artistic vision with the historic theatrical tradition of hand painted scenography. He painted three sets, made for large contemporary stages, measuring up to 10 by 16 meters. Jacobson took on the challenge by combining inspiration from baroque theater and religious imagery with his own characteristic turned up colors and motifs from popular culture. The results are magical landscapes with pink skies, billowing clouds and glittering water as well as the basilica in Florence with Brunelleschi’s cupola appearing as a miracle, both familiar and strangely odd. Inside the exhibition space at Wanås, the cathedral-like hay barn from the 18th century, the sets are put on display with a new focus as monumental paintings. The large scale produces an immediate colorful encounter that the viewer can walk into and be immersed in. Jacobson creates a bridge between the past and present and has for several years explored landscape in his work with paintings that invite us into an emotional, unknown terrain. When we move through Jacobson’s installation, or walk Begum’s paths, we enter into a physical experience, an exercise in seeing.

The sculpture park and the collection
Please note that the Wanås Foundation has taken special measures to ensure visitors’ safety and that the outdoor area consists of almost 100 acres. For 34 years, Wanås Konst has been an art center that produces and presents site-specific, contemporary international art, and live art and education in the landscape with an emphasis on innovation and accessibility. Wanås is a place in the world where art, nature, and history meet, located in Southern Sweden, one and a half hours from Malmö/Copenhagen. The collection in the sculpture park hosts almost 70 permanent works—specially created for the site by artists such as Igshaan Adams, Nathalie Djurberg & Hans Berg, Latifa Echakhch, Ann Hamilton, William Forsythe, Martin Puryear, and Yoko Ono. Wanås Konst is run by the nonprofit Wanås Foundation.