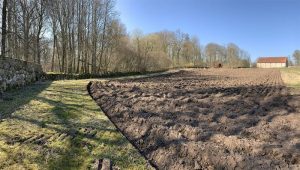 In the summer of 2020, the Wanås Foundation presents Sowing Into Painting, a solo exhibition with site-specific installations, film, sculpture and painting by internationally-acclaimed artist Kimsooja. The artist is creating a planting project for the sculpture park Wanås Konst in the form of a flax cultivation that investigates the conceptual relationship between painting, agriculture, and textile. The exhibition opens on the weekend of May 9 – 10, without a vernissage, but visitors are welcome to explore the artworks in the Sculpture Park, Art Gallery, and Hay Barn. Wanås Konst has taken special measures to ensure visitors’ safety and the outdoor area consists of almost 100 acres. The exhibition will continue until November 1, 2020.

Kimsooja uses nature and architecture and transforms them with the help of mirrors and fabric that call attention to us in our surroundings and give space for reflection. Kimsooja describes the exhibition at Wanås Konst as creating a circle within her oeuvre connecting her long standing interests in painting, textiles and agriculture.

Just inside one of the gates to the Sculpture Park, near the buildings at Wanås, flax grows as a part of Kimsooja’s exhibition. Through her interest in cultivating at Wanås, she takes advantage of something unique to the site that most art museums cannot offer—the possibility of farming the land. Kimsooja, who has been active as an artist since the early 1980s, began her artistic path as a painter with a particular interest in redefining the structure of the surface of the canvas. The canvases were eventually replaced by fabric, and Kimsooja began to rework the concept of surface and examine the three-dimensional in the woven fabric structure and through sewing. In the early 90s she transitioned to using pieces of fabric as they were while sewing and weaving became a way of examining the world, similarities and differences between cultures, and traditional women’s work. In works entitled A Needle Woman, the notion of the needle became a metaphor for seeing the body as a needle that weaves together the fabric of life, places and cultures.

The flax field, sown at the end of April, will grow and change over the course of the exhibition from green sprouts to stalks with sky-blue flowers and seeds. Growing flax pulls us back within art history to the flax fibers that were used to manufacture textiles including canvas and linseed oil that is the classic binding agent in artists’ oil paints. The planting project at Wanås Konst brings together Kimsooja’s interests in painting and textiles that have characterized her entire oeuvre.

These plants, which are grown and cultivated in a period of several months, will be transformed into paintings that could last for centuries. As well as a physical source of materials for painting, the field becomes a fluid tableau, covering the ground, in a pattern akin to a weaving in the earth. (Kimsooja)

In the presentation by Kimsooja, the field becomes an artwork, her interest goes beyond the object, and she creates awareness of what is already there. Her interest in nature is rather about a wider understanding about the cosmos. She uses the surroundings, sharpening our senses, emphasizing the stillness of the site, the spiritual element—she wants us to see, hear, and feel more.

Kimsooja’s oeuvre is associated with traditional South Korean bedcovers, which she has used in several installations since 90’s. In the sculpture park, she has instead chosen to work with old-fashioned white sheets that in Sweden are traditionally embroidered with a monogram or decorated with lace—a frame of life that are a part of creating a home and that display care and reflection. Harald Szeeman has described the sheets in Kimsooja’s oeuvre as a theater for birth and death, our ephemeral condition. Extending her Laundry Woman series, they are like a hanging field of paintings, in the beech wood forest, while they simultaneously provide connections to the mundane. In the Art Gallery, Kimsooja again works with textiles as a new series of large scale conceptual painting, through raw canvases of linen, both stretched and folded like bottari, the Korean cloth bundles used to wrap belongings and that have become a characteristic element of her oeuvre with references to migration, displacement, and urgency, as well as a formalistic form that is a three dimensional painting, a sculpture, and an object. Also in the Art Gallery are three of the six non-narrative chapters of Kimsooja’s first 16mm film series Thread Routes. Started in 2010 and shot on five different continents, the films use textiles as a point of investigation into human life, culture, and the natural world. For the artist, the approach is a ‘visual poem’ showing differences and similarities connecting people and cultures across the world.

In the old Hay Barn from 1750, Kimsooja has installed a mirror floor that reflects the surroundings and structure of the ceiling construction, which rises like a cathedral with its highest point 15 yards up. Through the mirror floor, she gives space for the observer to enter, and become a part of the artwork. On the other side of the building, which is more than 54 yards long, she has worked with stuffing fabrics in cracks and holes in the stone wall, tracing back to her Deductive Object made in conjunction with her residence at MoMA PS1 1993. In the large space, artworks coexist that make us look far away and up close. Her works both occupy the room and leave it empty—the entire space becomes an experience, with this experience being her artwork.

Elisabeth Millqvist, artistic director of Wanås Konst describes the work with the exhibition:

Kimsooja’s approach to stillness has made her an artist we have long wanted to work with as a part of our interest in the qualities of the site and highlighting nature. She first came to visit in July of 2018, and the plans slowly began to take shape. Now, almost two years later, during an ongoing global pandemic, it is a strange time to complete an exhibition, but fortunately, we could continue. I am so thankful we could keep in touch and continue working from a distance. Her orientation as an artist naturally establishes a dialogue with everything that is going on; the artworks give space for introspection and spirituality beyond religion. She creates a focus on the present that we need right now.

In 2006, Kimsooja presented a comprehensive exhibition at Magasin III in Stockholm, Sweden; in 2013 she represented South Korea at the Venice Biennale, and she has collaborated in exhibitions at the world’s leading art institutions. Kimsooja recently presented the city-wide project Traversées\Kimsooja in Poitiers, France as well as had solo exhibitions at Peabody Essex Museum in Massachusetts, USA, and Yorkshire Sculpture Park in England. She currently lives in Seoul. Read more at: Kimsooja Studio