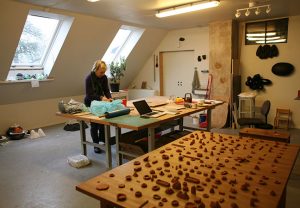 Jennifer Forsberg in her studio

In 2017, Wanås Konst is expanding in time and space. Jennifer Forsberg, who works in Österlen in Skåne, is the first artist to extend Wanås Konst’s indoor season.

Clay is a material with great scope and a sort of language, argues ceramist Mårten Medbo in his dissertation Clay-based Experience and Lingualism (2016). He writes that clay as communication can be compared to our body language or the language of children. In Forsberg’s contrasting idiom, in which miniatures are juxtaposed against swelling, organic, growing forms, clay speaks with tangibility and presence, through the material’s physicality and the craft’s deftness. She describes how she “is interested in how material, form, and surface function as language. I am seeking dialogue with the viewer’s physical understanding rather than the understanding we connect to words.”

Forsberg’s oeuvre is characterized by a desire to reconstruct and recontextualize. Household objects such as tables, buildings, ladders, lamps, and vessels are often part of her creations, but not always in their familiar guises. Instead, they are often presented in overwhelming numbers, in altered scale, or in a context that feels alternately familiar and off-putting.

In work clothes and with dirt under her fingernails, Forsberg digs in the warm earth of Wanås with its varied layers of clay. The work began more than a year before the opening of her exhibition. Physical labor is near and dear to Jennifer; curiosity and desire are awakened by what the earth can give her. “I have to find my inspiration while I’m moving, doing practical work. I’ve realized that my desire arises from the body rather than the mind. It’s something very physical,” she says.

As an antithesis to the physical movement and the intuitive decision-making stands the sluggishness and resistance of clay. It creates the opportunity for reflection and consideration; gives permission to pause, formulate, and reformulate, to find the rhythm between the mind and the hand. As an artist and craftsperson, she speaks about the connection between the physical work of transforming a material and the time that the process must be allowed to take.

The title of the exhibition, Land Tax, is originally an economic term, a transaction, which Jennifer expands and imbued with new meaning. For her, the term becomes a concept that describes a larger history that is not always told. She uses it as a metaphor for the fruits of labor, but also for its cost, a part of the history that is often lost to secrecy.

In her artistic process, she has allowed Wanås’ history to become meaningful in both the material and the work itself. She has spent a lot of time at Wanås and slowly gained an intimate knowledge of the place. The complexity of the relationships between all of the people who once worked and lived on the estate fascinates her and forms the point of departure for her creation. There was a sort of symbiosis in which one needed and was needed at the same time. Forsberg returns to the idea that the earth connects us, rich and poor, and that we all are and will always be indebted to the land we use. “I’m interested in the daily routine, the repetition, the toil. Many hours, many people, many lives—that history speaks to me,” she comments. – Filippa Forsberg

Jennifer Forsberg (born 1970, works in Eljaröd) is a ceramist and sculptor, trained at the School of Design and Crafts in Gothenburg as well as the Iceland Academy of the Arts in Reykjavík. Clay is central to her sculptures. With flowing, ample forms, she works with weight, movement, and the experience of different surfaces. She has had solo exhibitions at venues such as Blås & Knåda gallery in Stockholm (2002), Tjörnedala konsthall in Baskemölla (2007), Sölvesborgs konsthall (2010), and Galleri Mårtensson & Persson in Båstad (2014). She has created several public sculptures and creations in Sweden, both indoors and outdoors. The artwork Gold for Eslöv (2011) is her interpretation of waterpark, and other public creations can be seen in Farsta, Gislaved, Järfälla, Täby, Växjö, and Örebro. Since 2008, she has served as the director of Österlenskolan för konst och design in Simrishamn.
Wanås Konst
Hässleholmsvägen, Vanås,
289 90 Knislinge | Sweden