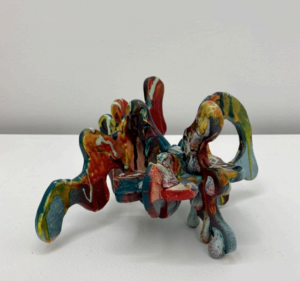 In the spring of 2020, artists Haidar Mahdi and Julia Selin meet in a joint exhibition in the Art Gallery at Wanås Konst. They both work physically and explore different media with flowing colors in distinctive consistencies and draw inspiration from popular culture such as science fiction and Heavy Metal. The exhibition is part of a series in which Wanås Konst works with artists with links to the region.

The exhibition Nightcrawlers brings together artists Haidar Mahdi and Julia Selin, each exploring through their own medium. They experiment with ceramics and painting, respectively, seeking the perfect surfaces, consistencies, or nuances—often colourful, with a slimy effect. Mahdi’s ceramic forms are overwhelmed by thick, glistening glazes that almost drown them, and in Selin’s lustrous paintings, strong colours are blended with an intense blackness. Selin is inspired by nature, and she has given the exhibition the title Nightcrawlers after the earthworm. Aristotle called the earthworm “the intestines of the earth,” and Queen Cleopatra declared it sacred. The earthworm works in silence to transform the remains of plants into fertile earth; the damp, writhing creature digs in darkness, shaping and reshaping the world it lives in and creates.

Haidar Mahdi received a combined degree from the University of Arts, Craft and Design ceramics and glass program and the Royal Institute of Art. Since graduating, he has worked with ceramics in a variety of expressions and allows the material, associated with handicraft as well as luxury and gaudiness, to mesh with genres with completely different associations in order to create tension and attraction. He has played with the cheerful extravagance of the Rococo and questioned where the boundary of good taste lies, brought together the macho culture of Black Metal with the fragility of ceramics, and lately, approached a severe aesthetics that is often associated with techno clubs or BDSM. He is not afraid of shifting modes of expression and wants to challenge his audience by subverting their expectations. For this exhibition, he has produced new works in which the form that is his starting point becomes transformed, covered with various glazes. Mahdi relinquishes control and lets chemistry take the wheel; the different substances in the glazes react with each other in the heat from the kiln, giving the forms their colour and finish.

Julia Selin, who began painting in her fourth year of Umeå Academy of Fine Arts, works primarily with the consistency of paint, wanting it to gleam and reflect. The paint should be both sheer and thick, nearly gelatinous, as she sweeps it around the canvas with the help of rags, brushes, and her hands. She often works in a large format and begins painting with the canvas lying on the floor, then twists turns, and pulls it, a treatment that often leaves traces on the finished painting in the form of impressions from an elbow or a shoe. Her method of painting is intensely physical, and she wants the observer to gain a physical sensation from the motifs she depicts. How does it feel to wade in a marshland, walk across a mire, or step with bare feet on moss? In several of her paintings, nature is depicted when darkness has fallen, and she is fascinated by the phenomenon that what was idyllic by day can, by night, be transformed into an eerie scene that makes the shadows come alive.