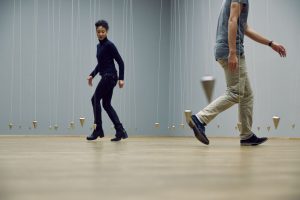 William Forsythe, Nowhere and Everywhere at the Same Time No 3, 2015. Photo: Dominik Mentzos.

Movement is the theme of SculptureMotion that brings together works that examine sculpture and movement and sculpture that invites action both swift and still. Six Swedish, Nordic, and international artists—one of which is an artists collective—participate in the exhibition that also includes moving image and performance. The artists begin with movement—adding, being, reproducing movement, the memory of movement, and emphasizing the dual meaning of the word “movement”: active physical movement, but also movement as mobilization. The exhibition program includes a Walk & Talk with William Forsythe, a performance weekend with Mammalian Diving Reflex, and choreographer Maria Hassabi’s outdoor performance Staged.

Movement stands in contrast to what sculpture is commonly associated with—the permanent or static. One artist who challenged that idea was Alexander Calder, who already in 1931 with his mobiles let objects leave the podium and move freely in the air before us. One of the world’s foremost choreographers William Forsythe’s oeuvre is the starting point for the exhibition SculptureMotion. While Calder spoke of Objet ballet, Forsythe talks about choreographic objects, something he has worked with for 20 years.

The artworks encompass slow-motion as well as action; when one artist asks us to lie down, another urges us—Stand up! In thematizing movement, one reference is Movement in Art [Rörelse i konsten] at Moderna Museet, Stockholm, in 1961 in collaboration with Stedelijk Museum, Amsterdam, with artists such as Alexander Calder and Jean Tinguely. Now it is time to investigate how artists approach motion today, beyond the mobile and the machine.

William Forsythe is a pioneering choreographer, but this exhibition emphasizes his choreographic objects. At Wanås, he fills a room in the Art Gallery, sets nature in motion, and creates a new artwork—his first for a sculpture park. With Underall (2017) Forsythe has chosen to work with an abandoned house and let a gentle movement be the focus. He incorporates motion into an existing building, throws us off balance. As with many of his objects, we gain the experience of ourselves by being aware of movement, and by ourselves being set in motion.

In the Art Gallery, Éva Mag has worked with clay, textiles, and metal in sculptures that form a potential obstacle course, built from memories of motions and thoughts about physical and mental strength. In an adjacent space, Sonia Khurana’s works include a video, instructions, and a performance, all of which are based on the prostrate body, that make the seemingly passive act of lying down active.

On a lawn in the sculpture park, Henrik Plenge Jacobsen turns grazing sheep into art that literally walks around. Outside the boundaries of the park, Carolina Falkholt depicts travel and motion with her large-scale artwork Train of Thoughts, an actual graffitied train car. Mammalian Diving Reflex leaves the site entirely. In These are the People in Your Neighborhood children conduct tours in the nearby community of Knislinge. Their participation emphasizes the dual meaning of “movement”: a physical term and a collective action to impact social conditions.