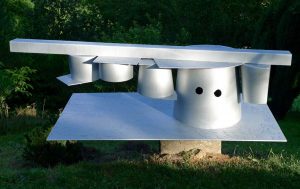 Bogomir Ecker (born 1950) is known for his sculptural interventions in urban space, for his space-filling installations and his enigmatic objects. Ecker’s sculptures have the appearance of technoid objects that can be interpreted as instruments for perceiving the world. He deals with phenomena of technology and communication and creates apparatuses that, archaic and futuristic in one, address our need to understand the world fundamentally and scientifically. In his work, one finds oneself in a coherent network of meanings, contexts of meaning, and questions concerning our civilizational and technological foundations, our dealings with nature, and the possibilities and limits of communicating with us about them.

For decades, Ecker has also been dealing with the role of photography. His access to photography always takes place with a sculptural intention. He has brought together outstanding images from his collection of anonymous press photos in large-format “tableaux”. Bogomir Ecker’s exhibition is conceived as a double exhibition at two locations in Wuppertal. While the Von der Heydt Kunsthalle is primarily devoted to his examination of photography, his early night photographs, the artist’s “tableaux” and their interaction with a few selected objects, the Skulpturenpark Waldfrieden focuses exclusively on his sculptural work.