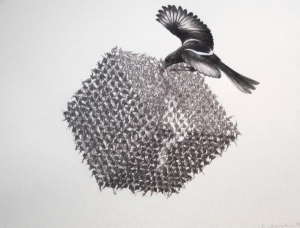 Who needs borders? Kings. To divide in order to reign. A border entails a sentry box, a sentry box entails a soldier. We do not cross, words that embody all privileges, all prohibitions, all censures, all tyrannies. Victor Hugo

The exhibition brings together thirty-seven internationally renowned contemporary artists from the European art scene as well as the Arab world, to exchange ideas about the notion of borders and its representations.

The exhibition is centered around a selection of works by European artists from the collection of the European Investment Bank’s Art Collection, chosen by Delphine Munro, whilst conversational pieces by artists from the Middle East and the Maghreb, have been hand-picked by guest curator Michket Krifa.

Since Ancient history, borders have raised questions related to themes of internal and external, identity and belonging. The European territory comprises hundreds of borders. While some of these borders are amongst the oldest in the world, such as the frontiers which separate Spain from Portugal, half of them are very recent, and others are a source conflict, or are in the process of being redefined. In the wake of Brexit, how can we not take the issue of Europe’s internal and external borders into account for the Boghossian Foundation’s programming, as they are particularly crucial in today’s climate?

The accompanying exhibition catalogue includes various photographs of the works and the biographies of exhibited artists.