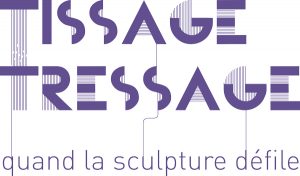 For his 8th show in 2018, the Foundation Villa Datris chose to explore different modes of expression of contemporary sculpture through textile art, weaving and braiding. This topic has its roots in traditional practices and naturally evokes the gestures on the loom, the frame and chain, the coming and the shuttle and the son that intertwine and give body to the textile material. The artists of our time draw in these immemorial gestures an approach sensitive and sensual material, fibres, son or twigs so folded and assembled. Sometimes there is a philosophy similar to that of the Arte Povera, anxious to return to the destitution of the origins, with modest materials or recovery. The process of weaving or braiding also shoves the modern settings of the emergency and reintroduced another temporality. This work of the hand is correlated with a perception of the work and time, and it introduces a true reflection on the notion of artifact.

Fully appealing to the senses, the texture is paramount in these works developed with natural fibers or issues of industrial production, which can be extremely diverse: wool, silk, cotton, String, fabric, hair horse, Wicker, herbs, lianas, synthetic threads, metal…
There is an intuitive, instinctive practice in many pieces, where the sons tangled up to oppression and the shreds of tissue are strange and disturbing objects, between rites and magic, fetishes and amulets, which are also a pure revelation of the unconscious.

Structuring, the textile fabric just propose a geometric with the abscissa & orderly organization. The wire can offer the opportunity to redesign the space and opening new perspectives, semi-conceptuelles graphic lines, sort of optical illusion. But some artists prefer to tackle a radically different approach, with first concern the questioning of the support and the surface of the work.

Traditionally associated with women’s world, the textile work has become a tool of claim for some women artists, who then turn codes of embroidery, crochet, work of needle to pass their messages. So, in this year of the fiftieth anniversary of may 68, the textile art is often seen as the emblem of a new commitment and a new language for many artists of the ‘ generation X ‘ express their feminist values, which claim as one art in itself a practice long equated to crafts. These works may also take the form of embroidered textiles, sometimes drop a real graphic narrative which can be subversive or committed.

Culmination of the weaving, the fabric is envelope and protection, in close relationship with the body, both second skin, or metamorphosis through clothing, adornment or finery. These ceremonial clothing-sculptures become the true monumental compositions.

Since the dawn of time, the thread fascinates and inspires artists and poets, and mythology ceased to unfold in the mysteries: the thread of the fates, implacable; one of the Web of Penelope, or even the breadcrumb – to finally Theseus find the way out of the labyrinth… It can also become node, imbroglio, Enigma, with the Gordian knot or loop of Moebius.

Symbolically, the textile is also this network of wires that links, subtle metaphor for interpersonal relationships. It is also the image of contemporary media that are the networks and the web, these networks of invisible threads, digital rhizomes that govern communications of today.

Weaving / Braid is a unique and dynamic action that combines various elements to give birth to a cross, a mix, the development of an unexpected work that follows the thread of inspiration, from the primitive to the tribal until expressions most contemporary. Universal and ancestral, textile art work captivates as the men and women, and offers them a new outlet, at the crossroads of artistic practices, ranging from order to chaos, of minimalism to the exuberant, of fragile deprivation to the invincibility of fiber metal or technological.

Very noticed in 2017 of the Documenta and the Venice Biennale editions, this renewed interest is shown by the importance of the place granted to the textile facilities and works from woven, braided or knotted mediums. By rediscovering this ancient technique intuitively, international contemporary artists open a new horizon to the sculpture of our time.