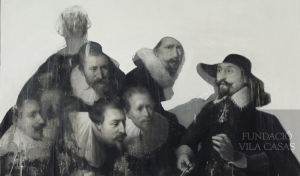 Jordi Díaz-Alamà (Granollers, 1986), the winner of the Fundació Vila Casas 2016 Painting Prize, reinterprets here the history of painting, plumbing the depths of what has been already painted to salvage elements he then reconstructs as homages to their originators.  Renovation of the classics, virtuosity and a preoccupation with the quality of the pictorial information present in his work are central themes in the painting of Díaz Alamà, one of the best-known young artists in Catalonia.

Jordi Díaz Alamà (Granollers, 1986) studied Fine Arts at the University of Barcelona, where he currently teaches in the Department of Drawing. His painting, grounded in realist classicism, particularly stands out for its meticulously detailed technical execution. Díaz Alamà is an exponent of a painting practice that cites classical ways of approaching the creative task, what he refers to as the know-how and guiding principles of painting’s great masters. Since 2013 he has combined his artistic activity with the educational project at the Barcelona Academy of Art, which he founded, and where he gives drawing and painting classes. His studio is also found on the premises.

Alamà has received numerous grants and awards. Highlights include a grant from the Fundación Arauco, enabling him to do various residences with the painter Guillermo Muñoz Vera in Chinchón, Madrid, and a grant from the Francisco Goya Chair, which made it possible for him to study with Antonio López. He also trained for a period with Norwegian artist Odd Nerdrum. Alamà was educated in drawing and painting at The Florence Academy of Art, where he learned the painting techniques put into practice by the great masters of the 19th century. He was declared winner of the Figurativas 11 art contest, organized by the Fundació de les Arts i els Artistes, in collaboration with the MEAM; he also won the 51st Ynglada-Guillot International Painting Prize, organized by the Reial Acadèmia Catalana de Belles Arts de Sant Jordi. He was also awarded a Medal of Honour at the 29th BMW Painting Prize, and was a finalist in the ARC Salon international competition, organized by the website Art Renewal Center.

According to Alamà, painting’s purpose is to tell stories. These narratives are meant to move us and express certain emotions to viewers, since that is the meaning of art, as he understands it. In this exhibition, Díaz Alamà’s proposal is drawn from a meticulous selection of classical works of art from leading historical masters, including Velázquez, Goya, Géricault, Friedrich, Manet and Degas; his paintings are developed from some of their most important works. In a process of emancipation that for the artist means a new creative experience, combined with an exercise in technical virtuosity, Alamà presents the great classics of the history of painting as cut-ups, covering them over with heavy layers of acrylic paint or dense coats of resin. The works are then fragmented, torn and sliced, and then, in a gesture of either rebellion or extreme loyalty, are re-attached, recomposed and sutured together.

This is the method Alamà chooses in selecting what is to appear in his painting and what should be hidden, enticingly inviting us to reflect on such questions. He places the viewer in counter-perspective to the temporality and atemporalilty of art, doing so by means of works that are recomposed, marked by the passing of time, simultaneously existing in the past and the present. In this regard, #ClásicosDesollados is an exemplary exercise in creative maturity, a daring and highly suggestive proposal, carrying us into the present by means of the past.

Can Framis Museum  (A0 gallery)