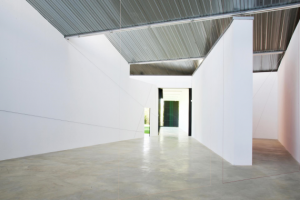 He first appeared on the art scene in 1967 and starting in 1968 took part in all of the major exhibitions of the minimalist scene. He also had a number of solo shows, notably at the Haus Lange Krefeld, the epicenter of the avant-garde in the 1960s.

An elastic straight line stretched between the floor and the ceiling reveals no structure, no tools for maintaining it—and gives the illusion of a thin rod balanced on one end. The beauty this mystery brings about endlessly fills us with wonder. The tension is gentle, not aggressive; it is induced but without being emphasized. The question of tension arises by comparing the sculpture in space with the ball of yarn it comes from.

The show features six sculptures produced between 1970 and 2002, along with a collection of prints from 1976, “four variations of two diagonal lines,” and a group of 22 original drawings presenting a like number of variations. Preliminary drawings were essential to Sandback’s process since his works require a large space for display. To make up for the difficulties of installing the works, Sandback relied on drawings to project on paper the threads designed for the limited spaces of galleries and museums.

Curated by Alexandre Devals, director of the Venet Foundation

(visit on reservation only via the site:)