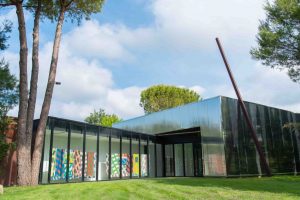 This summer the Venet Foundation pays homage to Claude Viallat, one of the major colorist of his generation. Curated by Alexandre Devals, director of the foundation, Claude Viallat – Liberating the color shows a selection of twenty works of Claude Viallat realized on military tarpaulins, a series that started in the 1970s and has continued over the past years. The exhibition’s core features works shown at CAPC (the Museum of Contemporary Art) in Bordeaux in 1980, a major retrospective of Claude Viallat’s work for the use of thick support, the search of polychromy, and the cut-out of the canvas in registers. This exhibition was a turning point in Viallat’s work and celebrated him as one of the leading figures in French painting.

The CAPC was still a raw space in the late 1970s, and to tackle its vast size, the centre’s founder and then director Jean-Louis Froment asked Claude Viallat what support he would like to work with. Viallat was dreaming of a circus tent, Froment sent him over a truck full of army surplus tents.

Faced with this khaki mountain, Viallat decided to get rid of the connotation surrounding this heavy robust cloth by covering the first tent in white, a preparation to which he applied his characteristic form in vertical sequences. In each register, the form was worked out in one direction and one color against a monochrome background.

Once he had “washed” the cloth in this way, exorcised it by moving beyond the usual symbolism of color, he had to recall to memory the drawings of the Avignon Fauvist Auguste Chabaud, which were done on sheets of greenish butcher paper. By pointing to a different system of references, he accepted the military support and gradually integrated it while keeping it in reserve.

The first specificity of this historical show is its support and what it implies: working with the material itself, denser than the “historical” pieces that are more readily associated with Supports/Surfaces, which float on light canvases.

The second specificity has to do with the exhibition venue, a spacious hall with balconies overlooking the site, a view down that justifies how the works are hung, i.e., classic arrangements (on the wall), customary ones for the artist (paintings hanging free in the space), or entirely new ones (paintings laid out on the floor and visible from both the passageways and the ground floor).

The third specificity touches on the exhibition date, 1980, that is, nearly fifteen years after the appearance of Viallat’s signal form in his work. This raises a question that is applicable to other artists of the same generation that blossomed in the middle of the 1960s: what happens after the avant-garde? What happens after that radical moment of laying things out flat which implicitly entails a progressive view of history? In the 1960s, this was given expression in Minimalist Art, Conceptual Art, Land Art, Arte Povera, the systemization of happenings and performances, and the manifestations of BMPT or Supports/Surfaces. La peinture en question (Painting in Question), the title of a 1969 show featuring Viallat along with Alocco, Dezeuze, Dolla, Pagès, and Saytour, proposed explorations of the picture and the support, and of the composition through its neglect. Yet in the early 1980s, in a limited lapse of time, we see a weakening of the principles that sustained radicalness and the burgeoning liberation of both color and art materials in general. Artists who had never strayed from a limited palette tackled color with a sensuality that was fairly unusual for them. Sol LeWitt turned his wall drawings into frescoes that are like heirs to the Renaissance; Donald Judd was developing his multicolor pieces; Daniel Buren began devising complex works like his huts; Bernar Venet freed his gesture with the Indeterminate Line sculptures; and Frank Stella, starting in 1983, transformed his still-geometrical works into colorful explosions that expand in space. It was a liberation that was all the more accepted in that the 1980s were the years of the new fauvists, neo-expressionists, free figurative painting, graffiti, the trans-avant-garde, etc.

Already in late 1980s, Bernard Ceysson had rightly sensed this transition. It was at this time that he put together a show for Saint-Etienne’s Museum of Art and Industry he called Après le classicisme (After Classicism), and Viallat was very much a part of it.

For Viallat, one needs “minimal shifts for an upheaval in the work,” as is well known to the ethnologist, who observes that “through the simple change of attitude of the observer, the observed changes shape.” Yet we have to admit that the change Viallat effected in 1980 (in reality around 1978, the year of the first works exhibited at CAPC) offers something more than minimal shifts with the compartmentalization of the picture, the use of a denser pigment, multiple points of view that haunt the space like interferences. As Jacques Beauffet (Former head curator of Saint- Étienne Modern Art Museum) points out, “one wonders if it isn’t appeals like these to ‘high art’ and ‘high culture’ that would be the bearers of truly subversive values today.”

Retrospectively, this transition proved essential in building the work of one of the greatest contemporary colorists.

It is also a chance to honor Bernard Ceysson, historian, museum director, gallery owner, and Viallat’s traveling companion for many years now, who will be the Venet Foundation’s guest of honor this summer.

Alexandre Devals Director of the foundation

ABOUT THE VENET FOUNDATION
Created in 2014, the Venet Foundation opens its doors to visitors at an exceptional art venue comprising over 4 hectares in the heart of Provence in the villag e of Le Muy. The Foundation is home to the conceptual and minimal art collection of Diane and Bernar Venet, one of the most important in the world.The sculpture park features monumental pieces by major artists such as the Stella Chapel created for the site by Frank Stella (2014), and James Turrell’s Elliptic Ecliptic (installed in 2016), Fourth Piece of Nine by Carl Andre, Arman’s Déchainés, the first Open Cube of Sol LeWitt, Lamentable by François Morellet, along with works by Bernar Venet, such as the Effondrement 85.8° Arc x 16 which was shown in Versailles in 2011.
The permanent display is complemented each year by a summer exhibition devoted to one particular artist in the Gallery, along with a show highlighting works by Bernar Venet in the Factory.

Venet Foundation
Chemin du Moulin des Serres – 83490 Le Muy
www.venetfoundation.org
The Venet Foundation is open to the public from 13 June to 13 September, Thursday afternoons and Fridays, by appointment only.