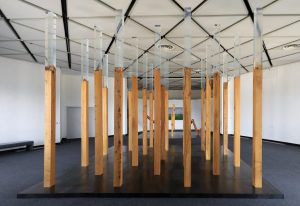 Born in 1943 in Bavaria, Vera Röhm, (froma Russian mother and a German father)  grew up in Geneva, and Darmstadt. Perfectly bilingual German-French, as a result of her multicultural childhood, she studied in Paris giving her a grand opening on the world. Everything is duality in this artist who lives between Darmstadt and the City of Light. After having worked with stone and metal, which she combines with the plexiglass, Vera Röhm is dedicated since the 70s to the Ergänzungen or complementarities of materials that evoke the merger. The plexiglass becomes complementary to the wood. The artist works with beams of wood, which are broken at the end, and combines it with casts in plexiglass, a synthetic material which is based on the natural material. Two opposing elements that fit together to become fusion. This improbable couple, based on the construction industry, nevertheless evokes the deconstruction or even the confusion. Vera Röhm has its laws, its methods, its system.

Impossible not to think about Max Bill, inspired by Van Doesburg, who wrote in 1949 : “We call concrete art those works of art which are created according to a technique and laws which are entirely clean, without taking externally support on the sensitive nature or the transformation of it, that is to say, without the intervention of a process of abstraction “.