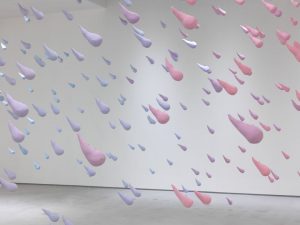 The major exhibition devoted to Urs Fischer, born in 1973 in Zurich,  aims to offer a panorama of Fischer’s artistic production since 2013: monumental as well as more intimate sculptures, paintings on aluminium panel and wallpapers. The whole is thereby inscribed within a dynamic circuit involving the movement of the visitor.

Above and beyond the power of Fischer’s organisation of space, as demonstrated, for example, by the deluge of oversize multicolour raindrops in his 400 m2 installation Melodrama (2013), the singularity of this show derives from the fact that the totality of the museum’s spaces is devoted to a single artist. Generous, ironic and arousing our empathy, Fischer’s works punctuate a route that traverses the most atypical spaces, including the front courtyard and the wood-panelled study. Among them also appearsUndergrowth (1889) by Vincent van Gogh, the annual loan from the Van Gogh Museum in Amsterdam.

Urs Fischer’s œuvre is marked by an extraordinary tension between, on the one hand, the notion of individuality and the collective, and on the other, the evocation of traditional sculptural formats and the production of works in two dimensions in the postdigital era. This oscillation between two poles sometimes results in their overlapping, so that the visual illusion normally associated with the medium of photography also becomes a property of sculpture.

Weaving itself through the works on display is the reference to Van Gogh – whether in the title of the exhibition, the emotional charge carried by three-dimensional relief, the affirmation of highly studied colour or the ambivalence contained in the self-portrait.