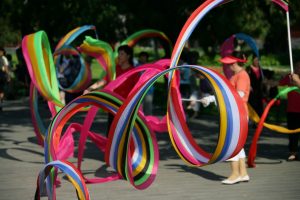 From March 24 to June 17, UCCA presents  This marks the first exhibition of the Sarah Morris’ entire filmic output anywhere in the world, set within a vast installation comprised of paintings, drawings and a monumental wall painting specially devised for the Great Hall. The 14 films on view offer open ended explorations of space that emerge through a democratic overview of their architectures, protagonists, situations, and processes, shown at UCCA in a sequence of custom-built spaces arrayed throughout the former factory chamber of the Great Hall. The title of the exhibition might be understood as a reference to Morris’s creative trajectory, which can be divided into several ten-year periods—the same amount of time the Trojan war lasted, and the exact number of years that it took Odysseus to sail home to Ithaca. Morris debuted her first film, Midtown, in 1998, went on to shoot Beijing in 2008, and now returns, in 2018, to the city which inspired both the film and several of her paintings. Her artistic process, too, is Odyssean, involving journeys to multiple countries, and entanglements with characters and powers that seek repeatedly to drive her off course.

Morris’s paintings run parallel to her films, describing urban, social, and bureaucratic typologies with points, vectors, and angles, mapping a set of coordinates onto a two-dimensional surface. Rather than abstractions, it is more apt to view these features as a “glossary…used to depict a visible reality (architectural, social or economic) that capitalism has turned into an abstract painting.” Prior to the opening of the exhibition, Morris will execute an original, site-specific wall painting at UCCA, 57.74 meters wide by 9 meters tall, which will encompass the space in which the exhibition is held.

Having grown up in the era of post-Watergate skepticism, Morris creates films fueled by a tension between paranoia and disavowal, characteristic of the heroes in high postmodernist novels, struggling to make sense of overdetermined systems. Her works are filled with the suspicion that behind the surfaces of day-to-day reality lie conspiracies of massive scope. This epistemic unease ultimately wreaks havoc with the genesis of ideas: if late capitalism is a giant playbook, then the boundary between reality and construct is blurred, meaning that, as J.G. Ballard has said, “external reality is a fiction.”

Connections proliferate in these films. 1972 is a portrait of the police psychologist Dr. Georg Seiber, hired by the International Olympic Committee to anticipate scenarios jeopardizing the safety of the Munich Games, and who correctly predicted the attack by paramilitary organization, Black September. Beijing employs metonymic rings—the Olympic symbol, the concentric circles radiating from the Forbidden Palace, and the bureaucratic hoops Morris jumped through in production—to investigate the 2008 Games. Finite and Infinite Games, the most recent film in the exhibition, records a conversation between Morris and Alexander Kluge, lawyer for the Frankfurt school, about the differences between the culture industry and poststructuralist play. Points on a Line juxtaposes the Farnsworth House, designed by Mies van der Rohe, to the nearly-identical Glass House, designed by Philip Johnson, complicating modernist notions of originality and authorship. Chicago explores the architecture of the city to which Mies fled, during World War II, where he founded the “New Bauhaus.” Los Angeles, like 1972 and Robert Towne, unpacks an obsession with performance, exploring Hollywood’s psychological landscape and the ambitions of actors and actresses who, even “off set” still play versions of themselves.

Challenges to Morris’s journey to create her films are, in another sense, the very objects of her search. This is perhaps why, in Finite and Infinite Games, she describes the artist’s duty as one of being open “to possibly being used by a force that is larger than you, that might corrupt your meaning.” Unlike the epic—or, indeed, the modern—hero, Morris has not chosen to go forward or onward, but inward: her work evinces the belief that the smallest image, voice, or event, can provide the key to understanding.