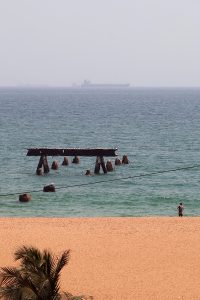 Musquiqui Chihying is apt at deploying different media including film, photography, and installation to explore the relationships formed by people and objects with public space, as well as the changes that capital has wrought on human life. In recent work he has used historical research to unearth the postcolonial and post-immigrant elements buried in Japanese, Korean and Taiwanese popular culture, using this perspective to investigate contemporary global society. His newest work starts from a group of wooden sculptures shipped from Africa to the institution now known as the National Museum of China during its reconstruction in the years leading up to 2011, combining film and installation art to examine the evolution of economic and cultural exchange between Asia and Africa as the non-aligned ideals of the 1955 Bandung Conference have yielded to a new Sinocentric order.

About The “New Directions”

Initiated in 2015, the “New Directions” series offers some of China’s most promising young artists a platform to realize their first institutional solo exhibition and monographic publication. Deepening UCCA’s ongoing commitment to emerging practices pioneered by shows including “The New Normal” (2017), “ON|OFF” (2013), “Breaking Forecast” (2009), and the “Curated By…” series (2010-2012), New Directions aims to present, through a constellation of singular positions, an overall sense of the richness and complexity of new art in China today.