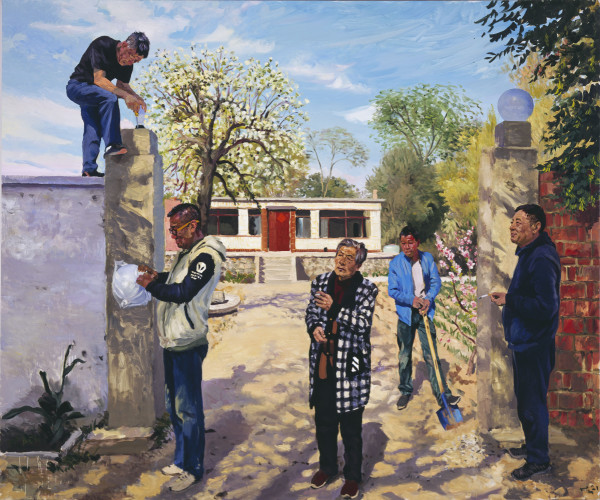 Liu Xiaodong is the contemporary heir to China’s realist painting tradition. His key works of the 1990s depict China’s new era with dramatic clarity, informed by a sensitivity for film and photography that curator Jérôme Sans has called “painting as shooting.” Since the early 2000s, he has expanded his practice into performative plein air situations staged in locations of narrative and even geopolitical significance, from the Three Gorges Dam to the U.S.-Mexico border. For his 2010 exhibition “Hometown Boy” at UCCA Beijing, Liu trained his lens on his childhood friends in the post-industrial paper mill town of Jincheng, Liaoning province, in an extended meditation on social mobility and personal transformation. For this exhibition, Liu portrays the people who have been closest to him throughout his life and career. He begins with a major self-portrait, based on photographs for which he crouched on the wintry site of his father’s grave in his ancestral village of Heitu (Black Earth), a few miles from Jincheng. The work was completed in New York, where he spent a vital year early in his career (1993-94) as well as the better part of 2020, quarantined in a Manhattan apartment with his wife, eminent painter Yu Hong, and daughter, new media artist Liu Wa. Other portraits feature the artist’s creative contemporaries—inspirations and interlocutors from the worlds of film and literature—and kinfolk, including his mother, brother, and a family friend. The paintings are complemented by series of smaller works on paper, photographs, journals, archival materials, and, crucially, a new film by director Yang Bo that documents the process and context of their making. This exhibition is curated by UCCA Director Philip Tinari and UCCA Curator Yan Fang. A previous iteration of the exhibition was shown at UCCA Edge in the summer and autumn of 2021.

Liu Xiaodong (b. 1963, Jincheng, Liaoning province) lives and works in Beijing. He studied oil painting at the Central Academy of Fine Arts in Beijing, which he graduated from in 1988, and where he now teaches as a tenured professor. His work has been shown in major solo exhibitions at venues around the world including Dallas Contemporary (2020); Louisiana Museum of Art, Humlebæk, Denmark (2019); Kunsthalle Düsseldorf and NRW Forum, Germany (2018); Palazzo Strozzi-Strozzina, Florence (2016); Today Art Museum, Beijing (2013); Kunsthaus Graz, Austria (2012); and UCCA Beijing (2010). He has participated in group exhibitions at institutions including Somerset House, London (2020); the Solomon R. Guggenheim Museum, New York (2017); Fondation Louis Vuitton, Paris (2016); Long Museum, Shanghai (2014); Shanghai Minsheng Art Museum, Shanghai (2012); San Francisco Museum of Modern Art (2008); and Centre Pompidou, Paris (2003). His work has also been included in the Gwangju Biennale (2014); Venice Biennale (1997, 2013); Havana Biennial (2009); Biennale of Sydney (2006); and Shanghai Biennale (2000).