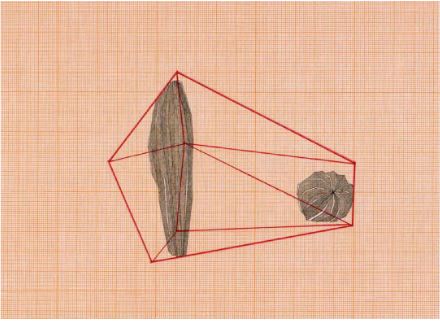 UCCA presents “Zhang Ruyi: Speaking Softly,” the artist’s largest institutional solo exhibition to date. The show brings together more than 20 new artworks commissioned by the museum, comprehensively presenting several creative threads from the past decade of the artist’s practice, as well introducing her recent explorations of transparent materials.

From December 23, 2022 to April 9, 2023, UCCA presents “Zhang Ruyi: Speaking Softly.” As Zhang Ruyi’s (b. 1985, Shanghai) largest institutional solo exhibition to date, the show features more than 20 new works commissioned by the museum. These pieces offer a systematic overview of how the artist has adopted cacti, concrete, grids, and other elements as symbols through which to explore the relationships between people and society, people and architecture, and the natural and industrial worlds. “Speaking Softly” also offers the first focused presentation of Zhang’s use of glass, plastic films, and other standardized, transparent materials, reflecting on the myriad connotations of transparency. “Zhang Ruyi: Speaking Softly” is curated by UCCA Curator Neil Zhang.

Over the past decade, Zhang Ruyi has used her precise grasp of sculptural materials and keen perception of everyday life to create art evoking alienated, post-modern urban landscapes, across which a personal lexicon of symbols repeatedly appears. In these scenes, everyday objects are stripped of their functionality, distorted in shape, or combined with industrial materials. These juxtapositions attract attention through their unusual visual appeal, while also inviting viewers to contemplate the metaphors, conflicts, and linkages contained within. The exhibition title “Speaking Softly” describes an ongoing current in the artist’s practice: from cement sculptures to the rubble of demolished buildings, thorns to silk, falling water drops to trickling dust, each resonates in a state of near silence, whispering of the city. Like the thorns and cactus spines that dot her works, everything waits in unassuming silence, yet possesses a piercing sharpness that cannot be ignored.

Cacti form one of the central motifs in Zhang Ruyi’s practice. The artist grew interested in these plants after serendipitously finding a cactus left by a previous tenant in a dilapidated apartment she rented shortly after graduating from university. Inspired by the plant’s tenacity, she has used its imagery as a way to build spaces and as a symbol for the relationship between individuals and their social reality, mining the rich contrasts between cacti’s spiky exteriors and soft interiors. Often, she makes sculptural casts of cacti using concrete, the most industrial of materials. Shifted from an organic, biological body to an inorganic, industrial substance, the cacti become metaphors for estrangement from nature. Works such as the “Matte Substance” series (2019), Swaying Posture (2022), and Ghost of Metamorphic Creature (2022) bring to mind various contradictions and questions within modernity: how humanity has altered both organisms and artificial objects; who has the right to speak of power and control; and the conflict between urban and personal space. In other works where cacti are combined with industrial detritus, their status as an organic material is further challenged, transforming them into a kind of sculptural hybrid, a “Modern Fossil” which can seen in the series of the same name (2021-2022) and other pieces including Submerged Landscape – 2 (2022). These works demonstrate how the artist has constantly experimented with the shapes, dimensions, materials, and settings through which she has depicted cacti, as well as how her reflections on these plants have extended beyond the milieu of daily life into a broader social context. The cactus becomes a means to touch upon the opposition between individual freedom and spatial discipline, the power dynamics hidden in processes of material transformation, and the sometimes indistinct boundary between the artificial and the natural.

The exhibition’s two-dimensional works, including the “Decoration” (2022) and the “Folding the Distant” series (2022), further illustrate Zhang Ruyi’s speculation on space and materiality. The most striking feature of these works is their use of grids built out of repeated lines, inspired by artist’s experience learning printmaking as an undergraduate. In earlier works, Zhang drew cacti on graph paper, the strictness of the grids only emphasizing the irregularity of the plants’ geometry. She would eventually free the cacti from these matrixes and transform them into the aforementioned sculptures; the grids have also moved into the real world, taking the form of tightly arranged tiles. Zhang’s repeated use of grids as a foundational element across many of her works is not only the rational study of a purely geometric form, but also a kind of understated footnote, buried in the background—as they regulate and restrain compositions, the grids remind viewers of the countless hidden rules that maintain order in everyday life

“Speaking Softly” also features two new large-scale sculptural installations, The Desert Is Not Sad, Nor Is it Deserted (2022) and Water Stain (2022), which highlight the artist’s recent use of mass-produced transparent materials. In The Desert Is Not Sad, Nor Is it Deserted, the artist evokes the recognizable form of a plastic greenhouse—a gridded metal skeleton and an exterior of transparent plastic film. Able to transform unstable external conditions into a controllable system, greenhouses illustrate how humanity often challenges and then simulates nature. However, the placement of this greenhouse alongside pristine white tiles in the exhibition hall complicates matters, removing its original function and turning it into unadulterated spectacle. In Water Stain, Zhang Ruyi constructs an enclosed space, once again using transparent plastic film. A steam generator is inside, causing water to constantly condense and slide off the plastic film. The tiles that are also inside appear blurry and indistinct in the mist. The plastic film becomes an ambiguous boundary, implying conflict and connection between the outside world and the space’s interior. In these pieces, the transparent physical structures may be seen through, but not penetrated—on the one hand, the plastic film represents transparency, openness, and freedom; yet on the other hand, it forms an obstruction, a means of control. Transparent materials may seem invisible, inclusive, and open, but they always maintain a kind of restraint and absolutist isolation. In Zhang’s hands, they become another metaphor for describing the complexity of contemporary social relations.