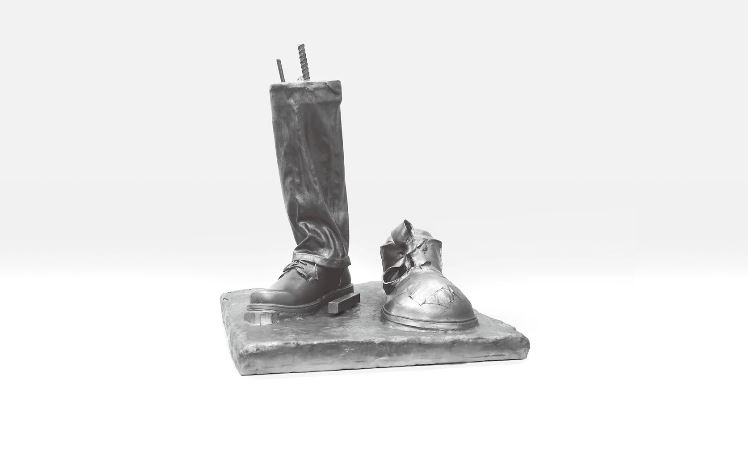 From December 23, 2022 to April 9, 2023, UCCA presents “Geof Oppenheimer: People in Reverse.” The show marks Geof Oppenheimer’s (b. 1973, Washington, D.C.) first solo exhibition in China. For more than two decades, Oppenheimer has worked in mediums including sculpture, video, drawing, and photography to explore how social and political relations are embedded within images and objects. Featuring new work commissioned by UCCA, this exhibition is centered on cast statues of three archetypal figures—the businessman, the flagbearer, and the observer—placed within an immersive environment formed out of custom-made walls, floor coverings, mass-produced products, and raw materials. These artworks were presented last year as part of the Diriyah Biennale, “Feeling the Stones,” which was curated by a team from UCCA, in a space specially constructed to recreate the proportions of UCCA’s Central Gallery. The sculptures and their bespoke surroundings speak to our collective anxieties over figuration, symbolism, and archetype in contemporary art and the modern social economy. In “People in Reverse” the artist explores how images and characters become symbols, and how such acts of representation shape our understanding of reality. Acknowledging the loss of clarity and connection produced by this process of simplification, Oppenheimer encourages audiences to reconsider their place in contemporary society and relationship with one another. “People in Reverse” is curated by UCCA Curator Luan Shixuan.

The three sculptures in “People in Reverse” each present an archetype from late capitalist society: the Businessman (2019-2021); the Flagbearer (2019-2021); and the Observer (2019-2021). These characters exist in the real world, yet they are also complicated by their parallel existence as widely understood yet oddly detached signifiers. Oppenheimer made each of these cast sculptures by crafting a mold around found objects and then pouring molten metal into the mold. The original found materials were often destroyed along the way, underscoring the sense of instability and hollowness that is also communicated by the sculptures’ chosen themes.

In the Businessman two cropped aluminum legs are posed with the slightest hint of contrapposto, one clad in a formal leather shoe, the other in a clown shoe. The juxtaposition of footwear undercuts the hagiographic nature of the Western sculptural traditions being referenced, along with the midcentury American masculinity of “the businessman” as a stereotypical figure. Moreover, considering how economic models, gender roles, and class-coded fashion cues have shifted over the past half-century, do today’s “businessmen” even resemble their symbolic form? The human figure is absent from the bronze-cast the Flagbearer, yet the tone is as subversive as in the previous piece: the would-be nationalist grandeur of a rippling flag is transformed into a stunted, blank miniature less than half a meter tall. In the Observer, also cast in bronze, a life-sized gloved hand holds a magnifying glass in front of a tablet. Like the flag, the tablet is blank, and the lens of the magnifying glass is actually opaque metal. While the laboratory cart that forms the bottom half of the piece implies the context of a scientific investigation, the piece remains defiantly obscure, suggesting that some forms of knowledge may remain ultimately unknowable.

In a carefully considered approach towards presentation that recalls theatrical set design, these figures are surrounded by a labyrinthine array of walls, around which a number of additional images and objects have also been arranged. In the exhibition catalogue, David J. Getsy, Eleanor Shea Professor of Art History at University of Virginia, comments that these disparate elements are united by the “central allegory” of “exposed structure”—the rough textures of the sculptures gesture towards a “behind-the-scenes” sense of incompleteness, and rebar sticks out of one of the Businessman’s legs, replacing bone with architectural material. The walls themselves sometimes are blank and white, and sometimes readily display the metal and drywall from which they are made. Other details gesture towards the origins and underlying structures behind large-scale power dynamics or systems. A photograph of one of the oldest mines in the world (Social_Flat_Backstory, 2020); a doubled view of the sun reflecting off a sleek, late-twentieth century glass office tower (Social_Flat_Mirror, 2020); a projector supported by a robotic-looking arm, playing an animation in which lines morph between male- and female-coded hairstyles (queens image, kings form, 2020); and an assortment of textiles dyed various shades of purple spread across the floor: these vignettes seem to offer glimpses beneath the surface of capital accumulation, white-collar labor, gender norms, and material production.

By zeroing in on fragments of contemporary life, from the segmented archetypes in his sculptures, to the found photographs that dot the walls, Oppenheimer encourages the viewer to reexamine reality with a new appreciation for its absurdity. How has a historical moment of unmatched prosperity led to such alienated working lives, public space, and personal relationships? The artist’s practice is deeply rooted in the specific experience of neoliberalism yet the reach of this socioeconomic model has long made this context globally relevant. “People in Reverse” offers no easy answers, but by demonstrating the brittle fragility of the male subject, heroic narratives, and hierarchies of knowledge—to name just a few of its conceptual targets—the exhibition provides a potent space for the viewer to question and begin to think beyond the quandaries of the contemporary condition.

Geof Oppenheimer (b. 1973, Washington D.C., lives and works in Chicago) studied at the Maryland Institute, College of Art, where he received his BFA, and received an MFA from the University of California, Berkeley. He is an associate professor of practice in the Department of Visual Arts at the University of Chicago. Oppenheimer takes up questions of civic value: the ways in which political and social structures are encoded in images and objects, and how meaning is formed in the modern world. Trained as a sculptor, Oppenheimer works across multiple mediums, including stage-set video productions and photography. His work has been exhibited nationally and internationally at a variety of venues, such as the CRP, Paris; Mary and Leigh Block Museum of Art, Evanston; MoMA PS1, New York; The Contemporary Museum, Baltimore; Museum of Contemporary Art Chicago; SITE Santa Fe; Indianapolis Museum of Art; Aspen Art Museum; the 4th Athens Biennale; and CAB Art Center, Brussels. His work has been the subject of published writings in Art in America, The Wall Street Journal, Chicago Tribune, and The New Yorker.