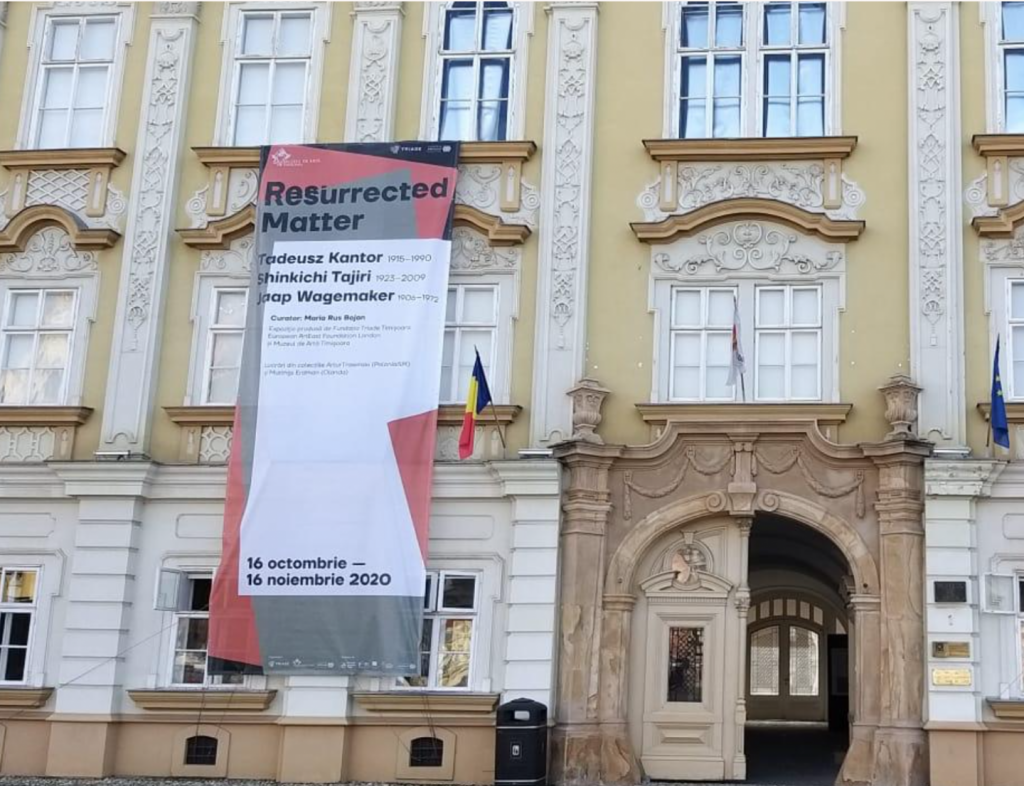 The TRIADE Foundation, in partnership with the Museum of Art Timisoara and European ArtEast Foundation London, proudly presents the exhibition Ressurected Matter, a historical survey that explores the prominent tendencies that shaped the postwar artistic climate in Europe, through the works of three important artists of different backgrounds and creative expressions: the Polish artist Tadeusz Kantor, the American-born Japanese artist Shinkichi Tajiri, who lived in France and The Netherlands, and the Dutch artist Jaap Wagemaker.

This presentation aims to propose a different reading of these three artists’ work, emphasizing the intersecting nature of certain artistic interests, topics and practices that lied at the foundations of artistic movements, such as Art Informel, Art Matière or Abstract Surrealism.

Emerging from the research conducted by the curator Maria Rus Bojan in two important collections in the Netherlands and Poland, this selection of artworks evokes the necessity of an alternative and multi-layered reading of the forgotten narratives of the 1950s, one that approaches the dilemmas of modernity from transnational and transcultural perspectives.

Inspired by Tadeusz Kantor’s reflections on the idea “that in every work of art there exists, independent of artist, an UR-MATTER that shapes itself and in which dwell all possible scenarios of life”(1), this exhibition navigates around these artists’ original approaches to the physical “matter” of painting and spiritual “matter” of sculpture, and their interest in using abstraction to convey strong emotional or expressive content.

Influenced by Constructivism, Dada, Art Informel and Surrealism, Tadeusz Kantor is one of the most famous representatives of Polish post-war avant-garde and known worldwide for his revolutionary theatrical performances. His paintings realized in his Informel period, from which a relevant selection is presented in this exhibition, are performative eruptions of matter combined with the action of finding, choosing, and bringing objects into his canvases. Besides the gestural expressionism and irrational plunging into material, these paintings are the result of immediate experience, manifestation of life, and a continuation of life into art. Later, these painterly experiments became the “prime matter” of his famous Informel theatre performances, where all elements involved—actors, objects, space, text, and sounds—turn into malleable matter imbued with emotions and memories.

Adopting Matterism in 1956, the Dutch artist Jaap Wagemaker made painterly collages from jute, decayed wood, sand, coal ashes, metal and found organic material that recall bandaged wounds or aerial views of vulcanic landscapes. His interest in natural objects and forms expresses a spiritual desire of connecting with nature and the mystical powers that lurks beneath the surface. For Wagemaker, just as for Kantor, the natural, primal, and unworked objects of nature speak of universal mysteries and spiritual experiences, reflecting on matter as a primal source of energy and life. His choice for matter art has not only to do with spirit of the time, but reflects upon infinite power of earth and nature to always resurrect in new forms, beyond the rational and known. The surface of Wagemaker’s collages is granular and porous, at times almost gaining an architectural structure, revealing a masterly approach to composition and experimental techniques that makes his works so tactile and unique.

An American of Japanese ancestry, Shinkichi Tajiri relocated to Europe in the late 1940s, bringing forth his own artistic language and identity in the aftermath of the Second World War. His own complex and paradoxical background combined with the new cultural context provide, nevertheless, an explanation for the great diversity of his oeuvre. While he never lived in Japan, his art is imbued with the pantheistic spirit of Japanese art through its identification with nature and the mystery of growth. Principles of verticality and materiality are at the core of his sculptures, rooted in a spiritual practice that expresses vulnerability and strength at the same time. Tajiri’s recurrent themes—the warrior and the knot—refer to universal experiences and paradoxes of life. Taking on the symbolism of the warrior from the Japanese culture, Tajiri creates new forms that evoke the closeness between life and death, between the physical/earthly existence and the spiritual realms. The knot furthers this paradox, as historically this has been used in constructive and destructive ways, determining whether lives can be saved or lost. These contradictory meanings are consonant with Tajiri’s personal life, whose mixed heritage propelled him to relentlessly question matters of life, death, and spirituality.

The coherence and relationship between these artists do not lie in their works’ visual appearance, but in the processes that stimulated their artistic creation. Reevaluating practices that stem from a highly introspective source, Resurrected Matter presents a constructive argument for reconsidering the importance of the art from the 1950s, a decade devoted to fascinating explorations of gestural abstraction, new materiality and freedom of form.

The exhibition was made possible by the generous support given by the European ArtEast Foundation and the exceptional loans from the Artur Trawinski Collection (Portugal/Poland) and Matthijs Erdman (The Netherlands).