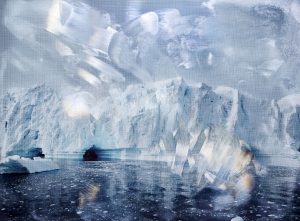 Surface Tension encourages us to see our relationship with everyday technology in unexpected ways by highlighting the marks we leave on glass screens we routinely ignore or erase. The subjects pictured beneath the surface of her photographs reflect our culture, whereas the smears and markings of fingerprints record our physical movements and fleeting attention.

Tabitha Soren (b.1967, San Antonio TX) is an artist and Peabody Award-winning journalist, best known for her work as an MTV news correspondent and on-air producer. In 1999, Soren took a fellowship at Stanford University where she shifted her visual arts practice from film to the still photograph. Her photographs are held in many private and public collections, including the Los Angeles County Museum of Art, the New Orleans Museum of Art, the George Eastman Museum of Photography, the Berkeley Art Museum and Pacific Film Archive, the Cleveland Museum of Art, the Oakland Museum of California, and San Francisco’s Pier 24. Soren lives and works in the San Francisco Bay Area.