Transformer Station: “In Concert: Photography and the Violin”, from the collection of Evan Mirapaul 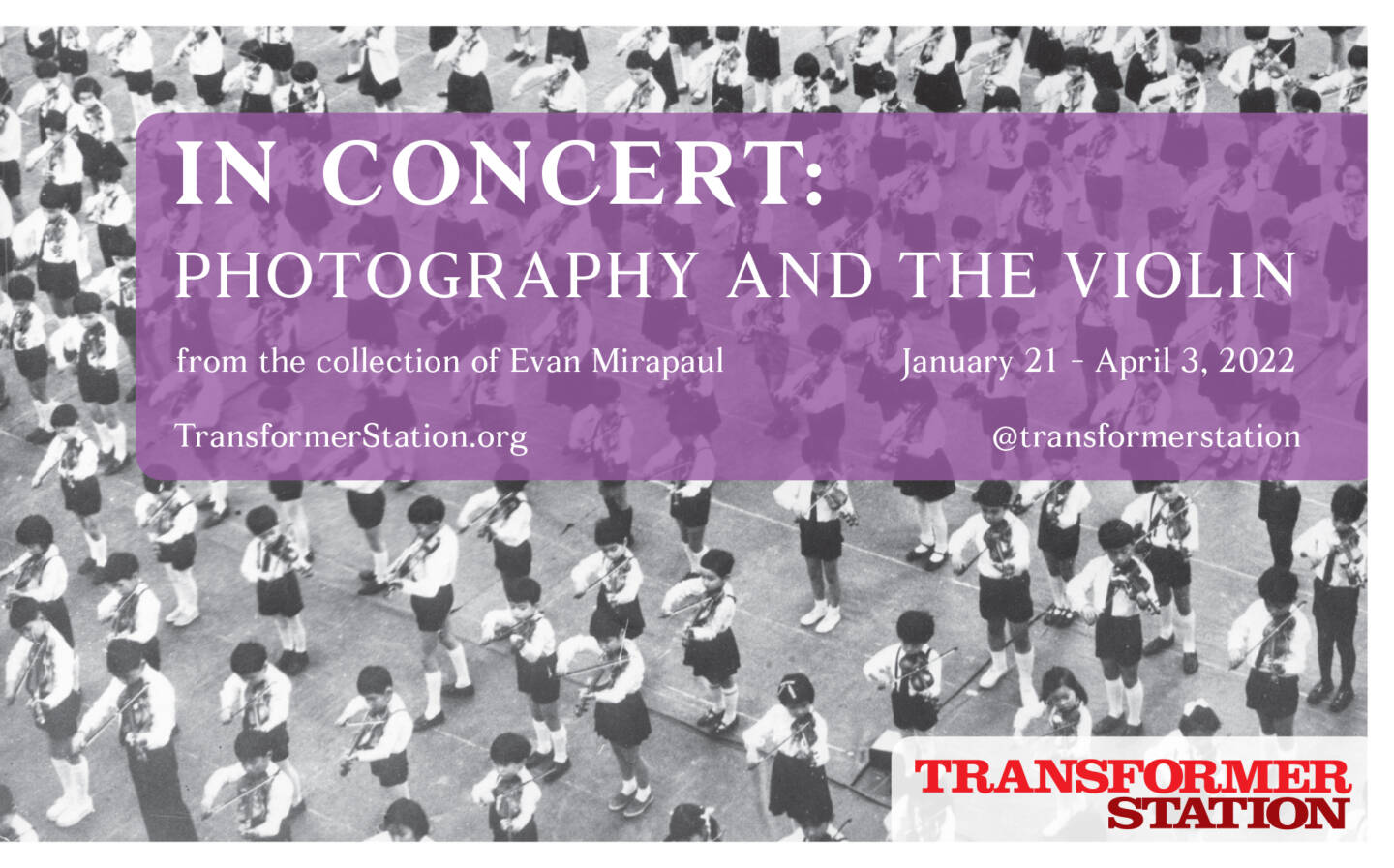 Transformer Station is thrilled to present the first-ever exhibition of In Concert: Photography and the Violin, which presents the instrument in dramatically different contexts across the history of photography. The 250 works are from the collection of Evan Mirapaul, an Ohio native and former concert violinist. The exhibition is organized by Dan Leers, Curator of Photography at the Carnegie Museum of Art, Pittsburgh.

According to Mr. Leers, “This is an important, unique and lively exhibition…viewers who are interested in fine-art photography will discover the diverse ways that the violin has been deployed throughout the medium’s history, plus everyone will enjoy the violin’s appearance in the hands of everyone from Albert Einstein to the Three Stooges.”

As the exhibition reveals, almost since the birth of photography in 1839, violins have been used to illustrate talent, status, geography and culture, as well as being presented as beautiful objects unto themselves. From high culture to low culture, from wealth to poverty, from Russia to Mexico, and from Hollywood to Appalachia, this exhibition spans a period of more than 175 years and features hundreds of photographs in every imaginable size, style, and format.

“I’m delighted that Transformation Station will be presenting the world premiere of the In Concert exhibition,” says Mr. Mirapaul. “It is an ideal venue for an exhibition that is both academically rich and visually entertaining.” Born in Akron, Mr. Mirapaul was a violinist in the Montreal and Pittsburgh symphonies and studied at the Cleveland Institute of Music. He currently lives and works in Pittsburgh.

In Concert: Photography and the Violin starts with photographs from the late 1840s and includes many examples of more commonplace vernacular works from the 19th Century including daguerrotypes, tintypes, and cabinet cards. Commercial works from the 20th Century are represented by advertisements, snapshots, 8×10 glossies for celebrities, and other pieces. Studio portraits of famous and more obscure violinists, taken by both the great studio artists and lesser-known practitioners, are also represented in the collection which contains over 2000 works.

In addition to these vernacular works, the collection demonstrates how some of the great photographic artists have chosen the violin as a subject. Included in this exhibition are works by some of the most important fine-art photographers of the 19th and 20th centuries including Irving Penn, Robert Frank, August Sander, Henri Cartier-Bresson, André Kertesz, Julia Margeret-Cameron, Arnold Newman, Yousuf Karsh, George Hurrell, Dorothea Lange, and Weegee. Contemporary work from artists like Rosalind Solomon, Justine Kurland, and Jerry Spagnoli is also part of the show.

Leers explains that photographic innovations combined with the ready availability and portability of the violin made these tools of creative expression natural partners available to people from all walks of life. This exhibition traces the development of both the camera and the violin as they were embraced and utilized by a myriad of cultures and communities. As digital technology continues to make visual and musical expression more accessible, this exhibition looks back at their rich history while also charting potential courses for their collaborative future.

During the exhibition’s run, Transformer Station will present a series of concerts in its galleries by violinists and string ensembles from a variety of musical genres. A schedule of concerts will be announced later in January 2022.

About Evan Mirapaul:
Evan Mirapaul lives a life immersed in the arts. He studied the violin in a conservatory setting from high school through college and moved on to a successful orchestral career that culminated in a principal position in the Pittsburgh Symphony. He left the PSO to create the Elements String Quartet. He retired from the violin in 2004. His journey to photography began on a trip with his brother in 1989 to see the exhibit On the Art of Fixing a Shadow, celebrating the 150th year of photography at the National Gallery in Washington D.C. Photography has become his passion. He is a former member of the Guggenheim Photography Committee, the Stieglitz Society at the Met, and the Acquisition Committees at The International Center for Photography and the Akron Art Museum. Travel has been a catalyst for this collector. Increasingly it has become Mirapaul’s goal to seek out photographers and galleries wherever he goes. He is a frequent visitor to Paris and Berlin, and is usually to be seen at the major Art and Photo fairs around the world. Frequently invited by gallery owners to consult on new artists for their rosters, he has been a reviewer at The Mois de la Photo in Montreal, Photolucida in Portland, Oregon, Fotofest in Houston, Texas, and at the Month of Photography in Budapest. Recently, he has been the founder and commissioner of the Troy Hill Art House project (more info at troyhillarthouses.com).

About Dan Leers:
Dan Leers is curator of photography at Carnegie Museum of Art. He has a BA in art history from Lawrence University and an MA in modern art/curatorial studies from Columbia University. He was the Beaumont and Nancy Newhall Curatorial Fellow in the Department of Photography at New York’s Museum of Modern Art. Leers came to Carnegie Museum of Art in 2015 and since then has organized numerous exhibitions and published several books. Recent projects include William Henry Fox Talbot and the Promise of Photography (2017–2018); Forum 80: Deana Lawson (2018); An-My Lê: On Contested Terrain (2020); and Trevor Paglen: Opposing Geometries (2020–2021). Leers is the curator of the current exhibition Sara Greenberger Rafferty and the forthcoming Gordon Parks in Pittsburgh, 1944/1946 (April 2022).