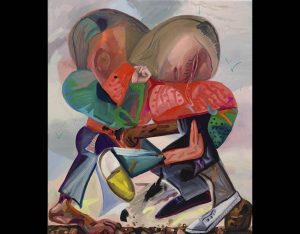 This new series of paintings by Schutz, created mostly in the past year,  reflect the turbulent political atmosphere experienced in the United States in the wake of the 2016 election. Though our society may seem more divided than ever, the exhibition suggests that this uncertainty may be what unites us. In the words of the artist, “Many of the paintings depict dystopic scenes of conflict and shame. Subjects conceal and reveal themselves, trying to hold themselves together as well as the picture.”

With bold brushwork, a vivid palette, and inventive compositions, Schutz’s figurative work sifts through the wide spectrum of human instinct and behavior, a hallmark of her practice. Schutz deftly employs hypothetical situations and imagined scenarios—such as the last man on earth or a multitasking swimmer who can do the front crawl, smoke and cry at the same time—in an attempt to illustrate what it feels like to navigate and live through our present time.

Eating Atom Bombs seeks to illustrate not what tears us apart and divides us, but rather the universal emotions and experiences that bind us together. Many of the paintings that will be on view depict figures in states of introspection, conflict, and concern. Together they mourn, console, defend themselves, and flee the scene. Some of the figures even seem to be aware of themselves and the edges of the painting, reacting against the limitations of their surroundings. Biblical motifs pervade these works, including wrath, expulsion, deposition (the descent of Christ from the cross), and pestilence; the figures either set off for a new world or struggle with the one they have.

Dana Schutz was born in Livonia, a suburb of Detroit, in 1976. She earned a BFA at the Cleveland Institute of Art in 2000 and an MFA at Columbia University, New York, in 2002. Her work has been the subject of multiple solo and group museum exhibitions both nationally and internationally, including a recent solo exhibition at ICA Boston, a survey at the Musée d’art contemporain de Montréal, and an exhibition of new works at the Kestnergesellschaft, Hanover, Germany. Dana Schutz: Paintings 2002–2006, organized by The Rose Art Museum, traveled to MOCA Cleveland in 2006.