Transformer Station: Chen Ran “In Course of the Miraculous (2015)” 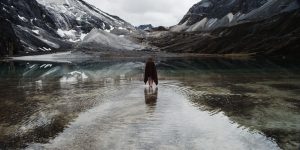 In Course of the Miraculous (2015), is a nine-hour epic which imagines the stories behind three real-life mysterious disappearances. These include British mountaineer George Mallory, who went missing while ascending Mount Everest in 1924; artist Bas Jan Ader, who vanished during his 1975 journey across the Atlantic as part of a performance titled In Search of the Miraculous; and the Chinese fishing trawler Lu Rong Yu no. 2682, which in 2011 returned to land after eight months with only one-third of its original crew still alive. With a narrative inspired by fables and mythic literature, Cheng reinterprets the title of Ader’s final work, and in doing so, reflects on his paradoxical pursuit of the inexplicable or unimaginable parts of history.

Cheng Ran was born in 1981 in Inner Mongolia, China, and currently lives and works in Hangzhou, China. His work has been featured in numerous biennials and group exhibitions, including the Art Institute of Chicago (2017), Chicago, The World Precedes the Eye, Institute of Contemporary Arts Singapore, Singapore (2016); Unlimited, Art Basel, Basel (2016); SALTWATER: a Theory of Thought Forms, the 14th Istanbul Biennial, Istanbul (2015); When I Give, I Give Myself, the Van Gogh Museum, Amsterdam (2015); Inside China – L’Intérieur du Géant, chi K11 art museum, Shanghai (2015), K11 Art Foundation Pop-Up Space, Hong Kong (2015) and Palais de Tokyo, Paris (2014); among others.

Cheng Ran’s most recent solo exhibitions include Diary of a Madman at Galerie Urs Meile, Beijing-Lucerne, Beijing (2017) and the New Museum, New York (2016); In Course of the Miraculous at the K11 Art Foundation, Hong Kong (2016). Cheng Ran was nominated for the first edition of the OCAT & Pierre Huber Art Prize in 2014 and the Absolut Art Award in 2013, and was named the “Best Video Artist” by the art magazine Radian in 2011.