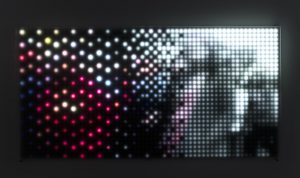 Second Skin proposes that an artwork’s surface is an interface (to use a digital metaphor) or a membrane (to use a biological one) created to express a shared, social identity. Bringing together artworks in a range of media from 1970 through 2017, including costumes, flags, paint on canvas and digital illusions, Second Skin shows how virtual selfhood is communicated and manifest in material, real time and place.

The group exhibition includes Jim Campbell’s Data Transformation from 2017, which turns a crowd of activists from the Women’s March in Washington, D.C., into an abstract constellation of LEDs, united by the color pink. A new acquisition by the second-generation Washington Color School painter Kenneth Young, Fall of the Rebel Angels from 1970, uses stained canvas technique and biological and spiritual metaphors as a triptych to address the role of abstract painting after the Civil Rights era. A major new acquisition of generative software art by Leo Villareal, Particle Field from 2017, is a triptych of OLED monitors in our black box gallery, evoking the sacred spaces favored by Color Field painters. Also on view are Nick Cave’s Soundsuit, a 1986 computer-generated painting by Harold Cohen, and works by Jon Rafman, Matilde Pérez, John Gerrard, Daniel Canogar, Guillermo Galindo and Elias Sime.

Also on view is Color Games featuring six artworks with color palettes generated by random processes—including computer algorithms, user participation and the element of chance—across six decades of hard-edge, kinetic and digital art. The use of chance as a creative strategy liberates artists from the formal rules of art and generates serendipitous art encounters.

Color Games includes paintings by California Hard-Edge painter Karl Benjamin, who devised a system for his daughter to randomly select colors; John Goodyear, an Op artist whose kinetic painting is set into motion by viewers; Victor Vasarely, who allowed collectors to choose his sculpture’s design with a do-it-yourself sticker package; Leo Villareal, whose algorithmically generated LEDs animate color patterns in real time; and Jason Salavon, whose prints include imagery derived from internet searches for the 100 most popular terms for “good” and “evil.”

To schedule a school or group tour, please contact  orangedoor@thomafoundation.org.