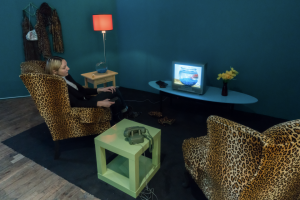 Slip into the world of Lorna, a fictional, middle-aged woman too obsessed with TV to leave her apartment. Sit in Lorna’s chair and use her remote control to choose her fate in an interactive video. Should Lorna shoot her TV, or move to Los Angeles to start a new life as an actress? Thirty-six user-selected paths lead you through the character’s grim desires and glossy distractions.

Lynn Hershman Leeson (b. 1941) has been called a “prophet of our cybernetic condition” by the New York Times. Working in San Francisco since the mid-1960s, she developed digital alter-egos like Lorna to investigate how new technologies extend the body and psyche into virtual space. Her high-tech, interactive artworks predicted many of today’s concerns with digital culture including camera surveillance, online identities, artificial intelligence, and gene editing.

Lorna, 1979–1984, is regarded as the first interactive video artwork ever created, and was originally produced on laserdisc. This was the most advanced video technology in the early 1980s, which the artist customized beyond its normal functions. Since then, the original artwork has been digitized but programmed to operate at its antique speed.

A video game of life’s choices, Lorna represents the crossroads we face in our digital era: is technology liberating or alienating? Wrote the artist, “As the branching path is deconstructed, players can become aware of the subtle yet powerful effects of fear caused by the media, and my hope is that they become more empowered (active) through this perception. By taking action on Lorna’s behalf, viewer/participants travel through their own internal labyrinth to their innermost transgressions.”

Recently rediscovered by the Whitney Museum of American Art as a pioneering use of technology in art, Lorna is being exhibited for the first time in Santa Fe, New Mexico, at the Thoma Foundation’s Art House.