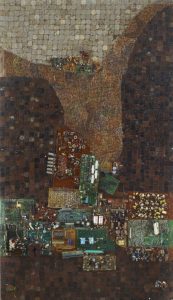 Earth Algorithms demonstrates how artists use new tools such as computational algorithms to engage the tradition of landscape art. Bringing together three artworks from South Korea, Japan, and Ethiopia, the exhibit is a case study of contemporary “natural resources” in today’s digital, globalized era, from bamboo and bottlecaps to internet jpegs. Artists Syōryū Honda, Lee Nam Lee, and Elias Sime rethink these materials as renewable technologies ripe for creative harvest in their landscape-inspired artworks. Using weaving, assemblage, and video, the artists propose a role of artistic intelligence to realize change in the world.

Lee Nam Lee is one of the most famous contemporary video artists in South Korea, known for his animated commentaries on global culture. Across five synced TVs like a video folding screen, traditional Korean scroll paintings become infiltrated with ancient Greek and Renaissance statues, Rene Magritte’s man with a bowler hat, and other cultural masterpieces that drop like soft bombs, more cartoonish than menacing. Later, UFOs swarm the surreal landscape in promise of techno-futurist creativity. In the end, snowfall quiets the landscape, a classical metaphor of longevity and resilience.

Elias Sime’s collage of computer motherboards, bottlecaps, and plastic products was assembled from Africa’s largest open-air market, Mercato, in his hometown of Addis Ababa, Ethiopia. Many of these materials were dumped by developing countries in the West. The artist transforms these byproducts of global economic development into beautiful works of abstract art as a commentary on the cultural values within diverse economic systems.

Syōryū Honda evolved his traditional knowledge of ikebana basketry technique into a modernized vision of abstract sculpture. Residing in the Japanese Alps, Honda is known for plaiting thin strips of bamboo into airy, tubular sculptures that express invisible phenomena like sound waves. Honda’s hollow openwork method allows for intuitive communication with the natural bamboo material. Bamboo is hardy but difficult to control; one should to listen to its message.