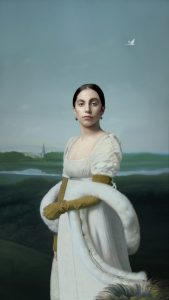 This exhibition brings together works from the Thoma Foundation’s diverse collections of Spanish Colonial painting and Digital Art for the first time. Eye Contact considers portraiture as a sociological art in which the notion of personhood is subjected to the vicissitudes of globalism. While portraits are commissioned and created to commemorate individual identity, they are repositories—at times unwittingly—of the sociopolitical forces around them: world trade, colonialism, or advances in technology. The three artworks on view span more than two centuries, from 1776 to 2015, and include Robert Wilson’s video portrait of Lady Gaga in the guise of early 19th century French aristocrat Caroline Riviere, styled in accordance with the famous painting of Riviere by Jean Auguste Dominque Ingres; Andrés Solano’s Portrait of Ana Josepha de Castañeda y de la Requerefrom 1776; and Daniel Rozin’s Selfish Gene Mirror, in which viewers temporarily become the subject via a small camera and Rozin’s customized “Darwinian” algorithm.