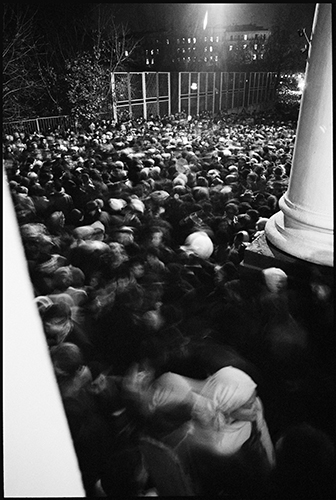 Russia has had a long, tumultuous history with its Jewish citizens. Short periods of prosperity and acceptance were alternated with centuries of persecution and exclusion. During the Cold War, Soviet Jews experienced discrimination and often were disciplined when they applied for emigration to Israel, Europe, or the United States. Applications came at a great cost, resulting in the loss of employment, educational opportunities, and isolation from family and friends. The Soviet Jewish experience is at the core of the work in this exhibition by Bill Aron and Yevgeniy Fiks.

During travels to Leningrad, Moscow, and Minsk in 1981, American photographer Bill Aron photographed ritual and social moments in various synagogues and recorded the brave faces of the Refuseniks, Jews who wished to emigrate but were denied permission.

Soviet Jewish Life will feature 27 of Aron’s images, many of which were initially presented to the world in his acclaimed first book, From the Corners of the Earth: Contemporary Photographs of the Jewish World (1986). The son of a Russian Jewish émigré to Philadelphia, Aron was observed by state security officers throughout his time behind the Iron Curtain. Like other Western photographers visiting the USSR, Soviet customs officers attempted to confiscate his negatives prior to departure. Had he not packed a bag of decoy film, these documents of persistence in the face of repression would have been lost forever.

Artist Yevgeniy Fiks left his native Moscow for New York in 1994, at the age of 22, going on to create several multimedia projects that reexamine Soviet history. His fascinating studies of Birobidzhan, the semi-autonomous Jewish region near the Soviet border with China, are presented through video, collage, drawing, an artist’s book, and archival materials. His installation Withered and restricted, according to Mem Lamed Kof (2021) juxtaposes a large print of his Soviet birth certificate with the audio of Dr. Martin Luther King Jr. speaking in defense of Soviet Jewry in a 1966 speech. Also on view is a project that explores the intersected narratives of the Soviet Jewish experience and the Soviet space program. With a mixture of documentary and fantasy, Fiks reflects on the utopian promises and historical realities of Jewish history in the East.

This exhibition will be accompanied by a series of free public programs and educational workshops supported by the Genesis Philanthropy Group. The programming will introduce museum visitors of all ages to Jewish life in the Soviet Union, its achievements and challenges, its joys and sorrows, and—perhaps most importantly—the search for freedom that would define a generation of Jews in and outside the Soviet Union. The Refuseniks, who led that fight for freedom, organized samizdat, the underground publication and distribution of literature banned by the authorities. Samizdat connected Refuseniks not only to each other but also to those fighting for their freedom all over the world. Concurrent with the Soviet Jewish Life exhibit and programming, the Wende Museum will be digitizing samizdat collection material from the Aleksander Smukler and Tsudikman Family collection, making these historic materials available online for scholars, specialists and the general public for the first time.

Soviet Jewish Life is presented in conjunction with the Robin Center for Russian-Speaking Jewry at the Wende Museum. Envisioned and underwritten by Wende Museum Board and Committee members Edward Robin and Peggy Robin, the project aims to preserve and expand awareness of the history of Russian-speaking Jews, Jews who lived in the Soviet Union, and the Refusenik movement through collections and public programming.