The Wende Museum: Martin Roemers, “Relics of the Cold War” 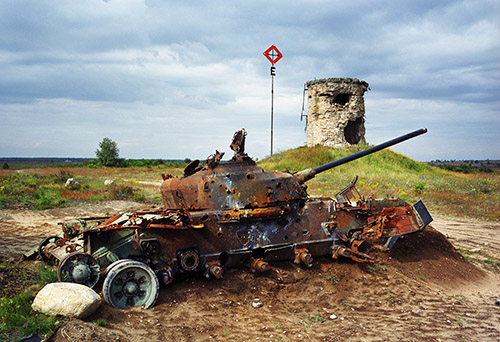 This press image may only be used during and in the context of the exhibition ‘Relics of the Cold War’ in The Wende Museum in Culver City from 10 April – 23 October 2022
Caption:
East Germany, Altengrabow, Russian shooting range.
Photo: Martin Roemers

During an eleven-year period, from 1998 through 2009, Dutch photographer Martin Roemers photographed the structural and topographic remnants of the Cold War in both the East and West. His research took him to Russia, Poland, Czech Republic, Ukraine, Latvia, Lithuania, Great Britain, Netherlands, Belgium, and Germany, where he documented underground tunnels, abandoned army bases, military training areas, rotting tanks, and destroyed monuments.

Wars not only have consequences for people but also for architecture and landscape. While conducting “photographic archeological research” on these physical remains of the Cold War, Roemers seeks out stillness in derelict military infrastructure that slowly and steadily has been overtaken by nature. Traveling through former “enemy territory,” Roemers explores these rusting tanks and destroyed monuments with a medium-format camera. On both sides of the Iron Curtain, he finds nuclear shelters, air force bases, shooting ranges, rocket launch pads, border fences, and radar stations, all built with a shared sense of paranoia and hyper-alertness that still remains.

Relics of the Cold War is the reflection of a militant society that prepared itself for a global nuclear war that would have ensured its own demise. It is also a consideration of the will toward de-escalation.

Martin Roemers (b. 1962) studied at the AKI Academy of Fine Arts in Enschede, Netherlands, and his work has been exhibited internationally in numerous solo and group exhibitions. He has received two World Press Photo Awards, among several other prizes.