The Phi Centre : Jim Carrey “This Light Never Goes Out” 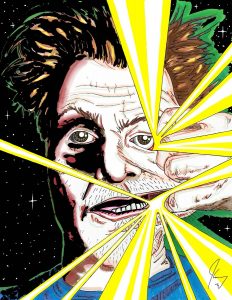 Jim Carrey is known to most people as a comedic genius on the silver screen, but since 2016, his Twitter feed has been the canvas for a series of satirical and subversive cartoons, penned in response to headlining news. As part of Phi’s commitment to celebrating technology-based media, the arts centre will present the world premiere of This Light Never Goes Out, featuring over 50 of Jim Carrey’s works in an exhibition running from June 20 to September 1, 2019.

The cartoons assail members of the American political Right, many who are abusing their political power to call on Twitter to ban Jim Carrey for his drawings. Combining artistic talent with a social message, the exhibition demonstrates how creative civic engagement can influence public debate, a theme that runs through all exhibitions at Phi this summer. “I don’t hate the subjects of my cartoons. I hate their unconsciousness,” says Jim Carrey. “Expressing my feelings of outrage through my art on social media has allowed me to stand in solidarity with millions of kindred spirits.”

Jim Carrey is an award-winning actor and emerging visual artist. His political drawings have been hailed by senior art critic and Pulitzer Prize-winning columnist for New York magazine, Jerry Saltz, who stated “I love them. As twisted, bleak, gaudy, inflicted, indignant, and furious as they are.” His most recent solo show, IndigNATION: Political Drawings by Jim Carrey, 2016-2018 was exhibited at Maccarone Gallery in Los Angeles. He is also the subject of the documentary Jim Carrey: I Needed Color which explores his life as an artist.