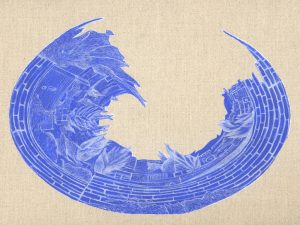 Anamorphosis is the first solo exhibition in London and the UK by the Amsterdam based Indian artist Praneet Soi. The Mosaic Rooms has commissioned Soi to create a new body of work comprising paintings and drawings and a video work informed by his recent stays in Palestine. Anamorphosis will also show recent work based on the artist’s immersions in the workshop of a master craftsman in Kashmir, with an installation bringing together a series of hand painted papier-mâché tiles that were produced there.

In June 2019, Praneet Soi travelled across the occupied Palestinian Territories and Israel. Beginning in Haifa, he drove up to the occupied Golan Heights and from there made his way down to Bethlehem, Battir, Hebron, Jericho, Nablus, Jenin, Salfit, and Ramallah before driving back up to Haifa, Akka and finally to Tel Aviv, to fly back to Europe. Soi’s aim was to experience the country through certain facets of its landscape and to visit, en-route, farms, workshops and factories, to understand productivity and entrepreneurship for people in Palestine. This subject has been a focus for Soi in his previous body of work, Notes on Labour. His route touched historical sites such as the Roman city of Sebastia, near Jenin, and the remains of Ottoman train tracks which transported goods and people in a different era, signs of earlier colonisations. Soi was looking for alternative representations of a land under occupation. His encounters and conversations were recorded and annotated and later, in his Amsterdam studio, developed into the works that are now on display here.

At the beginning of August, whilst Soi was working towards this exhibition, the Indian state of Kashmir had its autonomous relationship with India revoked. It was split into two parts along religious lines (Muslim and Buddhist) and its state-hood was terminated. Kashmir has long identified itself with the Palestinian struggle. 1947 marked Indian independence from British rule, and the beginning of Kashmir’s quest for autonomy. In that same year, the UN voted to end the British Mandate in Palestine, leading to the founding of the State of Israel in 1948, an event called Nakba, or ‘The Catastrophe’ by Palestinians. For Soi, it became imperative to include his ongoing work with craftsmen in Kashmir in this exhibition. The Ramallah based composer Dirar Kalash was commissioned to compose a sound-piece that connects the works which resulted from the journey through Palestine, to the installation containing works relating to Kashmir.

About Praneet Soi
Praneet Soi was born 1971, Kolkata, West Bengal, India. Following studies in India and the USA, Soi moved to the Netherlands in 2002, and divides his time between Amsterdam and Kolkata. His work is internationally recognised for his explorations of socio-political nuances and media representations. His practice incorporates traditional methods of miniature painting and sculpture, as well as time-based media such as video and sound. Recent solo exhibitions include Third Factory-From Kashmir to Lisbon via Caldas, at Calouste Gulbenkian Museum, Lisbon in 2018; Notes on Labour at Dr Bhau Daji Lad Museum, Mumbai in 2017 and Srinagar at the Van Abbe Museum, Eindhoven in 2016. Recent group exhibitions include Blackout as a part of IFFR 2019 at Kunsthal Rotterdam; the touring exhibition A Beast, a God and a Line at the Dhaka Art Summit in Bangladesh, Para Site, Hong Kong and Museum of Modern Art, Warsaw in 2018; and Universes in Universes, part of the 6th Asian Biennale, Taichung, Taiwan in 2017.