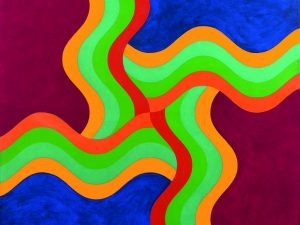 The Mosaic Rooms present works by the abstract painter Mohamed Melehi (b. 1936). This is the first UK exhibition dedicated to Mohamed Melehi, now regarded as a cornerstone of postcolonial Moroccan art and of modernism in the Global South. New Waves presents Melehi the painter, photographer, designer, teacher and cultural activist.

Melehi’s own work results from a dialogue between Moroccan traditional and popular craft, whilst also connecting to the hard edge painters of the 1960’s. His multiple and overflowing variations on the motif of the “wave” suggests new possibilities for a transnational modernism. The exhibition presents a selection of key works from the 1950s – 1980s.

New Waves: Mohamed Melehi and the Casablanca Art School is the final exhibition in a special three exhibition series of modernists from the Arab world and Iran, curated by Morad Montazami.

Mohamed Melehi (b.1936, Asilah, Morocco) is a painter, designer, photographer, muralist and cultural activist. His work has featured in numerous solo exhibitions including at the Institut du Monde Arabe, Paris, 1995, and the Bronx Museum of the Arts, New York, 1984. He has participated in group shows in Casablanca,  Baghdad, Algiers, London, Paris, Rome, Zurich and New York among others. His work is held in international museum collections including Centre Georges Pompidou, Paris; Tate Modern, London; Institut du Monde Arabe, Paris; MOMA, New York; and Mathaf: Arab Museum of Modern Art in Doha.

Morad Montazami is an art historian and curator. His research interests are cosmopolitan modernisms and histories of the avant-garde between trans-Arab, Iranian and Mediterranean zones. He has published essays on Farid Belkahia, Bahman Mohassess, Behjat Sadr, Mohamed Melehi, Mehdi Moutashar and Latif Al Ani, among others. He curated the exhibitions ARABÉCÉDAIRE Hamed Abdalla, and Behjat Sadr: Dusted Waters at The Mosaic Rooms in 2018. He also curated Bagdad Mon Amour at the Institut des Cultures d’Islam, Paris, 2018, Fugitive Volumes and Faouzi Laatiris: Catalogue Déraisonné at the Mohammed VI Museum of Modern and Contemporary Art, Rabat (2016) and co-curated the exhibition Unedited History: Iran 1960-2014 at Musée d’Art Moderne de la Ville de Paris and MAXXI, Rome (2014). He is the director of Zaman Books Publishing and its related journal Zamân.