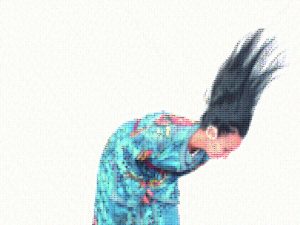 RAW QUEENS presents artists Fatima Mazmouz and Meriem Bennani in this exhibition that seeks to challenge cultural and political perceptions of women in the Arab world, specifically in Morocco. The exhibition is a collaboration between The Mosaic Rooms and Kulte Center for Visual Art and Editions, Morocco, and is curated by Kulte’s Director Yasmina Naji. It marks the UK debut of Casablanca based Fatima Mazmouz, alongside Moroccan born and New York based Bennani.

Fatima Mazmouz creates work which critiques social constructions of womanhood and identity, and explores colonial inheritance. The body is central in her work which often includes an element of performance from the artist herself. In this exhibition she explores through video, sculptures and photographic works the tradition of Aita, a traditional art form still active in popular culture in Morocco today. Mazmouz will look at the Aita performers, known as Chikates, who influenced Moroccan literature, poetry, history and activism. Through the dancing body of the Chikha, the woman becomes alternately a rooster, a snake or a horse. Inspiring a new mythology of imaginary figures, half-human, half-animal. The Chikha appears as a woman-warrior, a resistant who fights with dance and words, conveying through her body the tradition of an oral history of the country. Mazmouz pays tribute to these free and disobedient women.

Meriem Bennani’s multimedia practice engages with issues of identity related to femininity, feminism, and the intersection of religious and secular pop culture in Morocco. Her video Ghariba (2017), is a playful and moving portrait staged as a reality TV programme about the daily life of four Moroccan women. Playing with the aesthetic codes of soap operas and documentary films, Ghariba is at once intimate and whimsical. Bennani both celebrates and exposes the private lives of these women—from her own family members to Chaabi pop divas — in her digitally switched on world. The word ghariba means stranger in Arabic, it can also denote something strange and at odds with expectations. Bennani’s intimate portrayal explores the strength and fragility of these women and their multiple identities – bold women sharing thoughts on love and romance, dating and friendship, loneliness and community.

Curator Yasmina Naji states ‘As a project RAW QUEENS will seek to open new spaces for conversations on gender and popular culture, and to construct new representations of indigenous figures of power’. The exhibition is part of Shubbak, London’s biennial festival of Arab contemporary culture.

RAW QUEENS is the third exhibition in The Mosaic Rooms’ series of partnerships with regional institutions and curators and marks the final exhibition in the gallery’s tenth anniversary series of modernist and contemporary art from Egypt, Iran and Morocco.

Fatima Mazmouz lives and works in Casablanca, Morocco. Through her multimedia practice, photography, performance and installation she often questions individual and cultural identities.

Meriem Benanni is based in New York and was born in Rabat in Morocco. She works in video, sculpture, multimedia installation, drawing and Instagram. She is known for her playful and humorous use of digital technologies such as 3D animation and motion capture.

Yasmina Naji is the founder of Kulte Center for Contemporary Art and Editions in Rabat, Morocco.