The Mosaic Rooms: Mahmoud Khaled “Fantasies on a Found Phone, Dedicated to the Man Who Lost it” 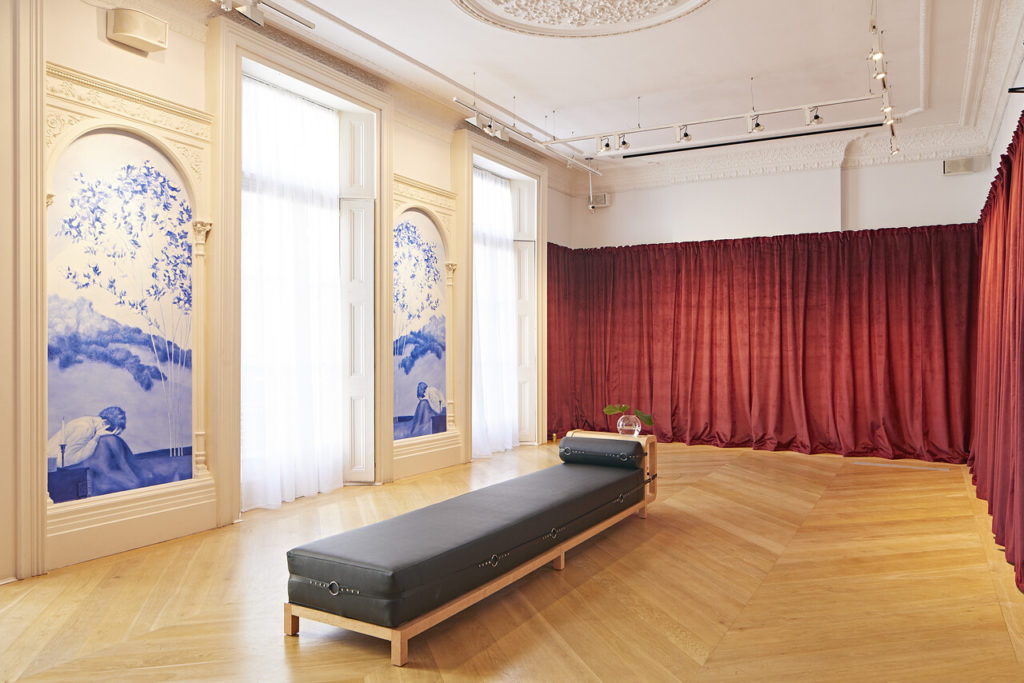 “Fantasies on a Found Phone, Dedicated to the Man Who Lost it”, the first UK solo exhibition by Mahmoud Khaled.

Through a series of unfolding installations and interventions Khaled ambitiously transforms The Mosaic Rooms period domestic architecture into the imagined dwellings of the owner of a lost phone. The work continues Khaled’s interest in historic house museums and the memorialising of individual perspectives found in them. In this new immersive commission, the artist repositions this museological form as a device to imagine a history of marginalised queer life.

In the exhibition, Khaled explores the tension between desire and anxiety, dream and reality. A state of sleeplessness permeates the space, acting as a metaphor for political states of being, of not belonging, and being displaced. This sense of disquiet is experienced in the installations where the visitor, as a voyeur, simultaneously feels at home and unsettled.

Calm, sees the main room covered in draped velvet and voile curtains, with a daybed in the middle of the room. This piece of furniture conjures references to Freud, and his work The interpretation of dreams. However, the proportions of this piece are disproportionately long, made from leather and wood and adorned with bondage straps. Centrally positioned, this daybed becomes an object of apprehension, desire, and kink. A sense of anxiety is evoked through the wall murals inspired by an etching from Max Klinger’s series “A Glove”. An accompanying sound piece transforms the room into a subverted version of a sleeping app, inviting the visitor to engage in a mindfulness exercise.

Another installation, For Those Who Can Not Sleep, features a rotating leather bed in perpetual motion. The work is a reference to Hugh Hefner’s iconic 1960s office-bed which became a pervading image of heterosexual masculinity in a domestic space. This round bed also became an appropriated design depicted in Egyptian TV and cinema, which the artist grew up watching. The circular surround framing the bed features another one of the etchings from Klinger’s series, and there is a looping soundtrack of discordant melodies.

While the phone or indeed its owner are never seen in the exhibition, the location of its loss is hinted at through the wallpaper motif and other objects found in the first room of the fictive home. On the bookshelf in this room is the accompanying publication, featuring images from the unlocked phone. Moving between the erotic, intimate, baroque and everyday, the compulsive sequence of images in the book references the dissonant and voyeuristic experience of scrolling through social media and swiping in dating apps, and the clash of hyper-capitalist forces of productivity and technology with the intimacy of a queer male gaze. Alongside, a large photograph of a bedroom hangs in the room, with the sentence “I can’t sleep without you anymore” handwritten across it.

This exhibition is generously supported by Arts Council England, Henry Moore Foundation and The Elephant Trust.

This accompanying publication is co-published by Book Works and The Mosaic Rooms as part of Book Works Co-Series No. 23. Designed by Marwan Kaabour.

‘Fantasies on a Found Phone, Dedicated to the Man Who Lost it‘, Mahmoud Khaled, 2022. Courtesy of the artist and The Mosaic Rooms, London. Photography: Andy Stagg