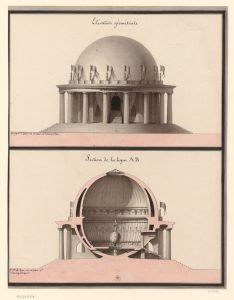 Draftsman and architect Jean-Jacques Lequeu (1757–1826) is now considered to be one of the most inventive artists of post-revolutionary France. His spectacularly detailed drawings range from proposals submitted to government entities to fantastic and speculative structures that were never intended to be constructed. They depict anatomical studies and civic infrastructure along with curious oddities such as a towering stable in the shape of a cow. Jean-Jacques Lequeu: Visionary Architect, Drawings from the Bibliothèque nationale de France explores the artist’s wildly imaginative architectural drawings for projects that were never realized in part due to the political turmoil caused by the French Revolution and also because the designs, though carefully executed on paper, were often impossible to build.

Lequeu’s work was included in the 1967 exhibition Visionary Architects, a presentation of 18th century French architectural drawings supported by the Menil Foundation. After its showing at the University of St. Thomas, Houston, the exhibition travelled to the Metropolitan Museum of Art, New York, where it influenced a number of young artists. Sol LeWitt and Claes Oldenburg, for example, are known to have closely studied the fanciful and obsessive peculiarities of Lequeu’s work. Several of the drawings that were included in Visionary Architects will be shown at the Menil Drawing Institute in the forthcoming presentation.

About Jean-Jacques Lequeu
Jean-Jacques Lequeu was born in Rouen, France, and studied architecture in Paris. Over the course of his career, Lequeu worked as a draftsman, a surveyor, and a cartographer. His posthumous acclaim would come from the discovery of hundreds of architectural and anatomical drawings that he made and gifted to the Bibliothèque nationale de France.

This exhibition was organized by the Menil Collection and the Bibliothèque nationale de France with support from Paris Musées. The exhibition in Houston is co-curated by the Menil Drawing Institute’s Edouard Kopp, the John R. Eckel, Jr. Chief Curator, and Kelly Montana, Assistant Curator. The exhibition in Paris was presented at the Petit Palais from December 11, 2018 – March 13, 2019. It was curated by Corinne Le Bitouzé and Christophe Leribault in collaboration with Laurent Baridon, Jean-Philippe Garric, and Martial Guédron.