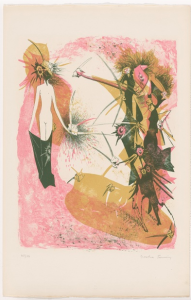 American artist and author Dorothea Tanning (1910–2012) created more than 100 graphic works between 1950 and 2001. Thanks to a recent generous gift to the Menil Collection from Barbara and Jim Metcalf, the Menil now owns the complete set, many of which will be displayed for the first time in The Graphic Work of Dorothea Tanning.

Born in the small Midwestern city of Galesburg, Illinois, artist and writer Dorothea Tanning moved to New York in 1935, where she supported herself as a commercial artist. In the early 1940s Tanning began to incorporate dream-like imagery that she encountered in the 1936 exhibition at the Museum of Modern Art, New York, Fantastic Art: Dada and Surrealism, into her own work. She soon attracted the attention of the Surrealist painters who had taken refuge in New York, such as Max Ernst, who included her work in an exhibition he organized for Peggy Guggenheim’s gallery, Art of This Century. In 1946, Tanning and Ernst married and moved to Sedona, Arizona. They returned to France in the mid-1950s, where Tanning remained until 1980 when she moved back to New York. Tanning died at the age of 101, just after completing her second volume of poetry.