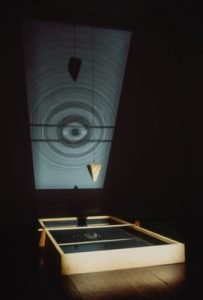 Since the 1980s, the Japanese American artist Mineko Grimmer (b. 1949) has focused on issues of space, time, movement, and sound, creating what she refers to as “sound-producing kinetic sculptures.” She unites avant-garde approaches to acoustics in the tradition of John Cage and the conceptual principles of American Minimalism, seamlessly merging her training in Eastern and Western art practices to produce deeply meditative and sensorial works.

Remembering Plato is a room-sized installation. Pyramid-shaped blocks of ice embedded with small pebbles are suspended above two water-filled basins. As the ice melts, the pebbles fall, striking the brass rods and piano wires extended over each basin, thus producing a randomized musical performance. The resulting ripples in the water are reflected on the dark gallery walls. The pebbles are strategically positioned within the ice to create a crescendo, rendering audible the speed of a typically silent natural process.

The title of the work refers to the Allegory of the Cave from Plato’s Republic, in which the philosopher Socrates posits that shadows cast on the wall of a cave are dim perceptions of reality.

About Mineko Grimmer
Mineko Grimmer was born in Hanamaki, Japan in 1949. She studied art in Japan and later earned her MFA at the Otis Art Institute of Parsons School of Design in Los Angeles in 1981. Her work has been exhibited at the Santa Monica Museum of Art; the Cleveland Center for Contemporary Art; the High Museum of Art, Atlanta. In 1991 and 1992, she performed with John Cage and János Négyesy at the University of California, San Diego; Stanford University; and John Hopkins University. Her work is held in the collections of the Smithsonian American Art Museum and the High Museum of Art, among other private collections.

This exhibition is generously supported by the City of Houston.