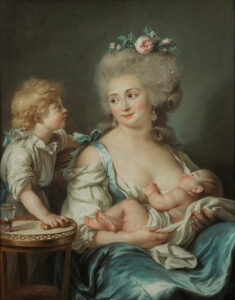 The J. Paul Getty Museum has acquired the greatest pastel by Adélaïde Labille-Guiard, one of the leading women artists in 18th-century Europe. The work was purchased at auction at Christie’s in Paris on June 16.

Portrait of Madame Charles Mitoire with Her Children (1783) depicts a fashionably dressed woman with her two young sons. Well-known in Parisian art circles, Madame Mitoire was the granddaughter of Carle Vanloo, a famous artist who had been First Painter to French king Louis XV. Though its composition echoes traditional representations of the Virgin and Child with Saint John the Baptist, the portrait radically signals the modernity of its subject and her approach to motherhood.

The Getty Museum has created a video to further explain this work, which can be watched here.