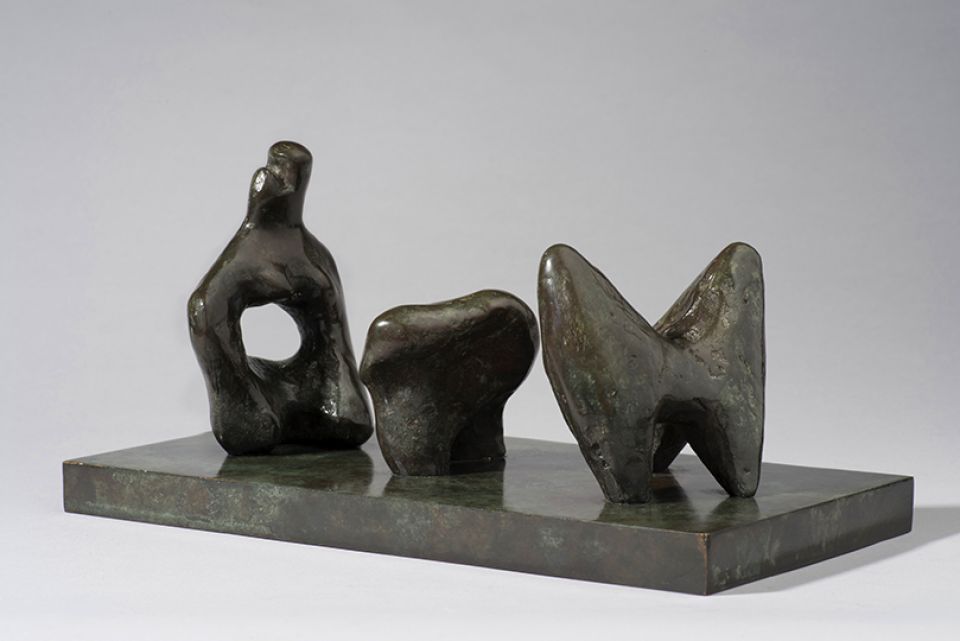 Configuration brings together a small, focused selection of sculpture, drawings and collages highlighting Henry Moore’s ceaseless investigation into form, material and volume. Throughout his lifetime, Moore collected objects such as bones, stones, shells and driftwood which he would turn over in his hands, build up, press into clay, cast, or photograph. This haptic practice saw Moore humanise these forms, and capture their relationship to the body both physical and imaginative.

“For me, everything in the world of form is understood through our own bodies. From our mother’s breast, from our bones, from bumping into things, we learn what is rough and what is smooth. To observe, to understand, to experience the vast variety of space, shape and form in the world, twenty lifetimes would not be enough.”

The exhibition contains a selection of Henry Moore’s collaged works of the 1930s and 1970s. Moore’s Transformation drawings from the 1930s depict the metamorphosis of natural forms then cut up, turned around and re-imagined. He repeated this method in his photo-collages of the 1970s in which fragments of flints from the studio take on the forms of torsos or heads.

At the centre of Configuration are Moore’s multipart figures in which the sculpted body ceases to be a self-contained reality. Moore incorporates space as a tangible substance and creates a permeable boundary between the physical body and the space it displaces. By using organic forms to create figures in the studio, which when enlarged relate to the wider landscape, Moore oscillates between a tactile material experience and a poetic image of the body. There is a power in this liminal space between what is or was and what is depicted. The potency of this familiarity or strangeness, is further enhanced when his materials change and bone becomes bronze.