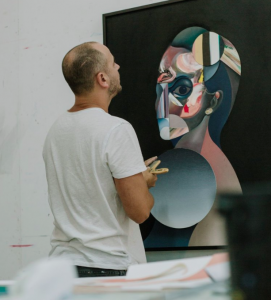 In late fall, GMF will feature a collection of new paintings created by artist Ryan Hewett specifically for the GMF space. The work is a continuation of the artist’s increasing emphasis on form and order in his compositions, which starkly contrasts with the loose, gestural style that characterized his earlier work. Hewett’s newest work draws on the artist’s fascination with portraiture, alongside a developing interest and representation of figurative anatomy through distinctive shapes and concentric circles. His fascination with portraiture does not focus on the external likeness of a subject, but rather an inner journey of self-exploration and expression.

Hewett has developed a large international following since his first solo exhibition in London, at Unit Gallery in 2015, sold out three weeks before the show opened. According to esteemed writer and art critic Edward Lucie-Smith, Hewett’s pictures “appear on the painted surface in the form of extraordinary apparitions, present yet not present. The vigorous marks of the brush reveal them, yet at the same time conceal them…[Hewett is] one of South Africa’s most distinguished painters today.”