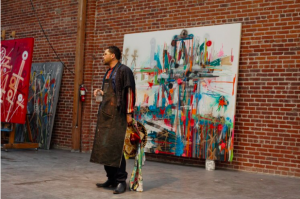 RETNA accesses spaces between text-based imagery and abstract emotive states with his mysterious lines of verse. Each block of text is a sophisticated system of hieroglyphs, calligraphy, and illuminated script. With influences from Arabic, Egyptian, Hebrew, Old English, and Native American typographies, RETNA’s distinctive language communicates a personal form of poetry. RETNA’s messages are masked in ciphers: words and meanings that are never immediately revealed, nor capable of being accurately translated. He employs ancient totemic symbols as a baseline, overlaid with beats from the urban jungle (sourced from his background in Los Angeles, born from Pipil – western indigenous El Salvadorian – Cherokee, Spaniard, and African-American bloodlines). These diverse subcultures are channeled into his work, often accompanied (either in the studio or on the street) by a stream of ambient or musical sounds. It is this multi-sensory experience that is brushed onto the surface for RETNA: a synthesis of auditory and visual content, spontaneously manifested.

Go to the list
Become an exclusive subscriber
Be the first to get our news!
Sign Up For Our Free Newsletter Today