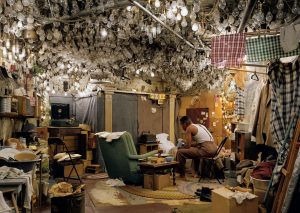 The George Economou Collection is pleased to announce Jeff Wall’s first solo exhibition in Greece. Over the course of a nearly 50-year career, the Canadian artist Jeff Wall has transformed our understanding of photography and pushed the medium into the center of fine art practice. Since first presenting a photograph as a transparency in a lightbox in 1978, Wall has composed images that reflect and actualize social and historical narratives through a critical synthesis of artistic strategies from popular culture, cinema, literature, and painting.

The exhibition Jeff Wall offers an intimate encounter with this paradigm-shifting oeuvre. It is a focused survey of the artist’s photographs and transparencies and includes some of his best-known tableaux. Works from the late 1980s to the 2010s are arranged in three groupings, reflecting Wall’s involvement with different historical genres, installed in a dramaturgical unfolding over the three floors of galleries.

A verdant street view that captures Wall’s native Vancouver opens the exhibition, exemplifying the artist’s reimagining of the beauty and sublime of the natural landscape by paying equally close attention to signifiers of modern life—roads, ports, prisons, and tract houses. In the same gallery is the key piece An Eviction (1988/2004), which depicts a charged scene of human conflict against a sprawling vista of Vancouver’s suburbia. This work, which is in the George Economou Collection, marks the first time Wall used digital tools to re-edit a large-scale photographic image—Eviction Struggle (1988)—adding figures and elements from other photographs taken during the shoot, but not used.

On the second floor, an ensemble of photographic prints surveys the work Wall has been making since suspending his production of transparencies in 2007. Three of the works, including the portrayals of two Vancouver costume historians and collectors, thematize clothing and its history. By contrast, Summer Afternoons (2013) is one of the artist’s few treatments of the nude figure.

The exhibition concludes with a group of lightbox tableaux from the late 1990s and early 2000s. Works such as Insomnia (1994) and After “Invisible Man” by Ralph Ellison, the Prologue (1999–2000) are some of Wall’s most iconic images and take their inspiration from a broad range of narrative sources. Several showcase the archaeological mode of image-making rendered explicit in Fieldwork…(2003), whose depiction of archaeologists excavating cultural remains can be seen as a metaphor for Wall’s own excavation of representational traditions and possibilities.

Jeff Wall is curated by art historian and curator Philipp Kaiser with Skarlet Smatana, Director of the George Economou Collection, in close collaboration with the artist. A publication with contributions by Philipp Kaiser, Jane Weinstock, and James Welling will accompany the exhibition.

Philipp Kaiser is an art historian and curator. He was recently named the Chief Executive Director of Artists and Programs for Marian Goodman Gallery in New York, London and Paris. Kaiser has held leadership positions in museums and organised exhibitions in Europe and the United States over the past twenty years. Previously, he was Director of the Museum Ludwig, Cologne, and Senior Curator at the Museum of Contemporary Art, Los Angeles. Before his work in Germany and the United States, Kaiser was head of contemporary art at the Kunstmuseum Basel. His major exhibitions include Ends of the Earth: Land Art to 1974 (Museum of Contemporary Art, Los Angeles), Jack Goldstein x 10,000 (Orange County Museum of Art, Los Angeles/Jewish Museum, New York) and Index: Conceptualism in California from the Permanent Collection (MoCA, Los Angeles). As an independent curator, his recent curatorial work includes the currently traveling exhibition Harald Szeemann: Museum of Obsessions, which opened at the Getty Research Institute in Los Angeles in 2018; Women of Veniceat the Swiss Pavilion for the 57th Venice Biennale; and solo exhibitions with artists Jim Shaw, Cindy Sherman and James Welling. Kaiser’s writings have appeared in a wide range of international books, catalogues and magazines.

The opening hours are Monday to Friday from 10am-6pm. For further information or images, please contact Caroline May at T +30 210 8090566 or caroline@artesia.gr