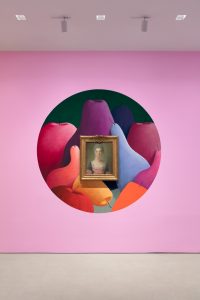 The exhibition centers on soft pastel, a fragile and ultimately temporal medium that experienced its brief golden age in eighteenth-century France, and arguably Europe. Venetian-born artist Rosalba Carriera, described by Party as the centerpiece and impetus of his presentation at FLAG, is credited with not only having popularized small-scale pastel portraiture, which was coveted and widely copied at the time, but for also revolutionizing the physical medium by binding powders into uniform sticks. Noted for their radiant palettes, lustrous tones, and gauzy atmospheric qualities, Carriera’s commissioned portraits of Venetian nobility, Grand Tourists, and European aristocracy made her one of the first female artists to achieve international acclaim and independent financial success prior to 1800. At the time, Pastel was praised as a painting medium for its lifelike quality, or “bloom,” it conferred upon subjects. The distinctive appearance results from the physical characteristics of the powders themselves, which reflect light from the facets of their finely divided particles and the air spaces in between, evoking a sense of light and accounting for the pastel’s velvety, matte quality[1].

Pastel portraits by Carriera and Jean-Baptiste Perronneau represent the short-lived Rococo[2] pastel craze and underscore the extravagant outfits and makeup for petites femmes of the period: rose-bud-shaped lips, pale skin, and powdered hair, with embellished bodices cut to accentuate a sitter’s breasts and décolletage. An emphasis on appearance was shared by wealthy men (petits-maîtres) of the Rococo period who “painted” their faces—often with same pastel pigments used in paintings—wore garments that exaggerated their natural proportions, donned elaborate wigs, masks, shaped facial patches[3], ostrich feathers, flowers, ribbons, jewels, and the color pink—used liberally throughout the exhibition at FLAG. This non-binary approach to gender presentation was soon rebuked by Enlightenment critics as libertine, effeminate, and anti-Revolutionary (or pro-monarchy). François Boucher’s (1703-1770) Portrait of Madame de Pompadour, 1758—a source inspiration for one of Party’s large-scale murals—was a target of particular aesthetic and political derision by philosopher Jean-Jacques Rousseau (1712-1778) who wrote, “This painting is the embodiment of the corruption and decadence of the French aristocracy.”[4]

Applied and blended by hand, Party’s painterly use of the effortlessly smudgeable soft pastel medium is a formidable task when applied to large-scale, unprotected walls. The site-specific murals, created by the artist over four weeks, take inspiration from paintings by Boucher and Jean-Honoré Fragonard (1732-1806), whose theatrical if not artificial allegories of courtship, gallantry, and mythology became frothy and much maligned hallmarks of the Rococo era. Though faithfully executed in the style of the artists, Party deviates from the originals: in one, he focuses on the high contrast fabrics of Marquise de Pompadour’s elaborate dress; in another, the non-natural landscape in Fragonard’s The Progress of Love, 1771-73, commissioned for, and famously rejected by, the Comtesse du Barry, the last Maîtresse-en-titre of Louis XV[5]—Pompadour being the king’s first. Party’s murals, including one based on Fragonard’s The Birth of Venus, 1753-55, are here layered with other artists’ pastels that shift the narrative, intent, and conversation in the Rococo paintings. In the case of FLAG’s opening wall, Party’s tondo mural of hyperchromatic, flatly rendered gourds and fruit—a recurring subject in his work—is punctuated by an eighteenth-century, almost confectionery portrait of an aristocratic woman by Perronneau.