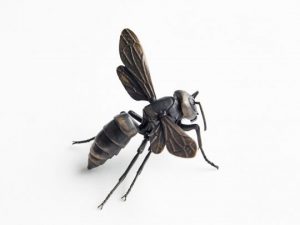 The Daiwa Anglo-Japanese Foundation is delighted to introduce the unique works of the acclaimed Japanese artist Haruo Mitsuta to the UK public.

Mitsuta is the only living artist who makes contemporary Jizai Okimono (“articulated animals”) – flexible animal figures made from metal pieces, which can replicate the movements of the original animals. Originally they were made by armourers in the late Edo and the Meiji period.

Inspired by traditional figures, Mitsuta creates a new kind of Jizai Okimono, based on the concept of 金属による命の再現 (Reproduction of life with metal).

Jizai Okimono have gained some recognition within Japan in recent years, but still belong to a very minor area of traditional Japanese metallic handicrafts. The vast majority of these items were sold abroad, so this exceptional form of art never had the chance to develop its roots within Japan, where it originated. Its presence may have been long lost in the Japanese art scene, but these objects have been collected and cherished by many people outside Japan.

Mitsuta will be showcasing some of his most impressive and startlingly realistic pieces in this exhibition.