The B & M Theocharakis Foundation: Dimitris Koukos “Under the light of Greece” 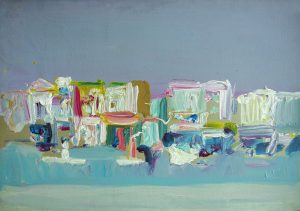 Dimitris Mytaras has noted about the work of Dimitris Koukos: “His plasticity borrows from the infinite variations offered to him by the Greek countryside, a charisma which I don’t believe everyone possesses and is in no way a small qualification for someone who wants to participate in the far-off adventures of art.” These words delivered by the great painter have been attested by the relentlessly fiery power of Koukos’ painting, since for fifty consecutive years the painter consistently and persistently reaches out to the Greek light through free gestural means.

The islands of Rhodes, Mykonos and Egina have been the field of his unrelenting observation and penetrating gaze. For Koukos, nature continues to be the miracle of the world, and to render it is his greatest challenge. Consequently, the Theocharakis Foundation will present his radiant landscapes, works of monumental scale that reveal the directness of his painting with regard to light and the rendering of space-landscape.

He has served as a special consultant at the studio of Yannis Moralis and that of Dimitris Mytaras in the Athens Fine School of Arts and has consistently exhibited his work in Greece and abroad.

The B & M Theocharakis Foundation