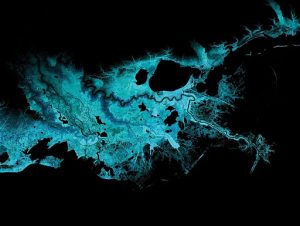 The oceans are changing very fast, yet knowledge of them is moving slowly and is enveloped in long-established forms of cultural separation and distinction between human activities at land and at sea. This division needs to be rethought to address the urgent and vast transformations that the seas are undergoing. –Territorial Agency

Territorial Agency: Oceans in Transformation synthesises three years of intersectional research, commissioned by TBA21–Academy that investigates the transformation of the world oceans during the Anthropocene. Assessing the latest scientific knowledge about the effects of a wide array of human-induced interferences on marine and coastal ecosystems, the project reiterates the critical role of the oceans in respect to planetary survival. TBA21–Academy and Territorial Agency have collaborated with a network of researchers and institutions to give exposure to new forms of visibility and understanding of the ocean brought by science, culture and art.

Informed and catalysed by global sea-level rise, one of the most visible sign of climate emergency, Oceans in Transformation considers the oceans as a sensorium; that is, a sensing body that absorbs and registers the intensified activities of humans in its circulations, ecosystems and dynamics. At the same time, it is being registered by different cultural, economic, scientific, legal, and conservationist groups in their efforts to understand the changes the oceans are undergoing. Noticing these pervasive transformations sets a whole new agenda, one that addresses human and nonhuman needs, with deep care, imagination, and far-sightedness.

Sea level rise, intensification of maritime transport, overfishing, depletion of coastal ecosystems, deep-sea mining, sea-floor trawling, oil exploration, extraction, migration, changing ocean circulations, militarisation, and melting ice are some of the ecocidal transformations that the research project traces and registers. By superimposing and interconnecting – conceptually and visually – the spatial inscriptions and reconfigurations they create, Oceans in Transformation rearranges the maritime space as a stage for human violence, empire, and colonial history. What emerges is a new figure where environmental and economic processes are deeply intertwined.

As an ongoing investigation, over the duration of the exhibition Territorial Agency: Oceans in Transformation, Ocean Space will host a programme of peer-to-peer gatherings and events, as part of its seasonal public programming. These will engage important voices in environmental conversations and research, including scientists, artists, governmental and society groups, policy makers and conservationists. As the body of work remains open to further development and research, Territorial Agency aims to prompt further conversations and offer both utopian proposals as well as concrete solutions for today.