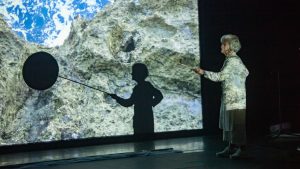 Joan Jonas’s exhibition Moving Off the Land II is the inaugural project at the newly opening Ocean Space in the revitalized Church of San Lorenzo in Venice. Spearheaded by TBA21–Academy and its network of partners, including universities, NGOs, museums, government agencies, and research institutes from around the world, Ocean Space is a platform catalyzing ocean advocacy, collaboration, and exchange through installations, performances, workshops, archives, and research.

Jonas’s installation is the culmination of three years of intensive research in aquariums around the world as well as in the waters off the coast of Jamaica, commissioned by TBA21–Academy and curated by Stefanie Hessler. Comprising new video, sculpture, drawing, and sound works, as well as a performance on May 7, 2019, the show centers on the role the oceans have played for cultures throughout history as a totemic, spiritual, and ecological touchstone.

Jonas represented the United States at the 56th Venice Biennale in 2015. With Moving Off the Land II, she returns to Venice and revisits some of the themes touched upon in her US Pavilion exhibition They Come to Us Without a Word: the natural world and the animals inhabiting it, as well as the present danger of climate change and extinction. Her new works dive deep into the ocean water, swim with the fish inhabiting it, and weave in literature and poetry by writers who have homed in on the liquid masses that cover two thirds of the planet. Following the methodology that has gained her lauded reputation, Jonas combines poetry and prose by writers like Emily Dickinson and Herman Melville with texts by Rachel Carson and Sy Montgomery, and with moving images filmed in aquariums and in Jamaica, where algae bloom and overfishing pose urgent threats to the environment.

The exhibition developed out of the performance Moving Off the Land, which was commissioned by TBA21–Academy in 2016 and has since been presented in parallel to the Kochi Biennale in 2016; at Tate Modern, London, in 2018; and at Fort Mason Center for Arts & Culture, San Francisco, in January 2019. Jonas’s emphasis on process relates to the way the itinerant Academy’s journeys at sea and on land connect disciplines, people, geographies, and formats. In the last year and a half, as part of a sustained dialogue about their respective work, the marine biologist and coral reef and photosynthesis expert David Gruber has shared with Jonas his captivating underwater recordings that focus on biofluorescence. In 2018, Gruber visited Jonas at her summer home in Cape Breton, Canada, where he shot footage of her dog, Ozu, on the shoreline. In Moving Off the Land II, the rich imagery by Gruber and other collaborators is juxtaposed with Jonas’s own voice and that of young people she frequently collaborates with, as well as music by the celebrated composer and drummer Ikue Mori and by the acclaimed musicians María Huld Markan Sigfusdottir and Ánde Somby. In her unique visual language, Jonas has created a confluence of the poetic and the observational, of mythological folklore, contemporary narratives, and scientific studies, going beyond the ways in which the ocean is usually described, to sense this living entity.

The opening program will include an introduction by Markus Reymann, director of TBA21–Academy; a conversation between Jonas and Dr. Sylvia Earle, marine biologist and National Geographic Explorer-in-Residence; and a discussion between Francesca Thyssen-Bornemisza, founder of TBA21, and Jorge Otero-Pailos, Professor and Director of Historic Preservation at the Graduate School of Architecture Planning and Preservation at Columbia University.

In conjunction with Jonas’ exhibition, select archival and research materials relating to the project, including interviews with the artist, will be accessible through the new digital platform Ocean Archive (oceanarchive.io). Launching in complete form in September 2019, this “colaboratory” is being developed by User Group, Inc. to operate at the intersection of scientific inquiry, artistic intelligence, and environmental advocacy.

Following the closure of Moving Off the Land II, Ocean Space will undergo additional work on its interior to create a dynamic structure of platforms and flexible spaces, designed by architect Andrés Jaque from the Office for Political Innovation. Ocean Space’s program will relaunch next spring, with work on its interior design expected to be completed over the next two years.

Commissioned by TBA21–Academy and co-produced with Luma Foundation.